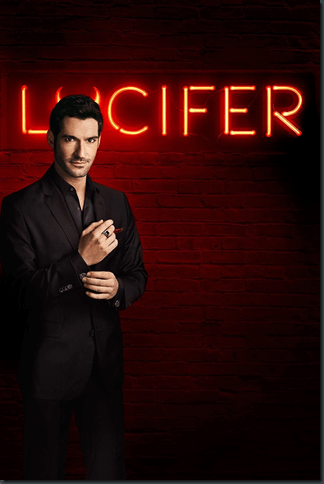 A new series has popped up on Fox and it’s grabbed my attention. What if the devil got bored with ruling the Underworld, took a vacation, appeared in Los Angeles and set up shop as a club owner? And what if Lucifer got paired up with a detective that both baffled and intrigued him? What if he wanted to solve crimes, not to bring peace to the victim, but to make sure justice was served on the guilty? And what if some of his methods were a touch on the unorthodox side?

Well, that’s what we’re looking at. And the ironic thing is, the devil is quite honest about who and what he is. He introduces himself as Lucifer Morningstar, a God given name (wink wink), says he immortal, claims to have a way with people so they tell him their deepest, darkest secrets, and makes plenty of references to "you humans", "wrong deity", and "our father". But no one seems to pick up on these clues and just thinks he’s a little quirky. He’s gone a little Hollywood apparently.

I think the show is off to a fine start with Tom Ellis playing a mischievous, but not evil little devil, who is out to have a good time and is doing his best to stave off boredom. Since he still has his powers, why not punish the guilty and enjoy a bit of wine, women and song.

Of course, there has to be a few wrinkles. You don’t just get to take a vacation from the Underworld and he’s reminded that his presence is requested before things get out of hand. Additionally, he’s taken a bit of a shine to the detective that seems resistant to his charms. And dare we say, he might be developing some feelings or at least compassion for these human creatures and may be starting to enjoy his time down here on earth.

Let’s not forget, Lucifer is also seeing a psychologist to work out a few existential problems.

If you’re in the mood, Lucifer is making an appearance on Monday’s.