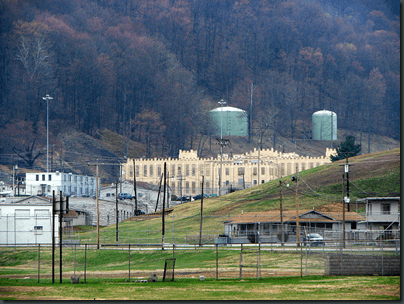 The team stays close to home to investigate this notorious prison that only recently closed its doors. Like so many other penitentiaries, this location was the scene of plenty of violence with almost all of it inflicted by inmates onto other inmates.

We get stories of prisoners stabbing each other, committing suicide and by the sound of it, picking fights just to prove who was top dog. Before the fencing was installed, prisoners would be thrown over the railing from the third floor to their death. Some of the paranormal incidents include voices, the sounds of doors opening and closing and the feeling of being touched.

It’s a massive complex including the main facilities, chapel and multiple cell blocks. As they start the baseline sweep of the chapel, some negative words like "wrong" and "beast" come through on the generator. The word
"wrong" is in reference to the chapel being a sanctuary.

As the check out the cell blocks, Doogie gets a mysterious burn hole in his shirt. This is attributed to Jack who was a small guy with a big mouth who smoked cigars. He met with an extremely violent end of being stabbed in the throat and then stabbed another 19 times for good measure.

To start off the night, they get together around a table for a game of dominoes. Oddly, they get a lot of activity on their monitors and hear the sound of a door closing. When they move on to another location, Porter gets wild readings on a temperature probe. The readings start at 100 degrees, then drop down below -2 degrees. Meanwhile, down in the isolation ward, Doogie feels like something is touching him on the ear.

During the course of the night, they get a lot of K2 hits and plenty of blips on their meters. There is even a growl that comes through.

For Day 2, they put together the Wraith Fog Trap which is a wall of fog from a fog machine charged with electricity from a Jacob’s Ladder. This is supposed to give the entities energy and a place to show themselves. If they capture energy, it will be contained in rechargeable batteries.

Things start of normally, but then something appears to attach itself to Doogie. He feels something is tugging at him, then grabbing him, then wrapping itself around him. By happenstance, there is a large thunderstorm that night and this only serves to feed energy into the air. As things reach their pitch, Doogie is beside himself with feeling nauseous and feels something is crawling all over him. The team feels something is forming in the center of the fog and believe they may have captured some energy in the batteries.

However, when they get back to home base, none of the batteries seem to be holding a charge. They may not have caught anything or perhaps the energy dissipated before they could detect it.

Overall, this was a pretty interesting investigation, as most prisons are. They get a lot of activity and they don’t resort to the tiresome "turn on the flashlight" trick. I don’t really think their experiment or trap really did anything, but it’s always fun to see a Jacob’s Ladder in action. I don’t really put any stock in the use of those phonetic generators regardless of how neat it is for one to say "beast" as you approach a chapel. And by the sound of it, no one within the prison regarded it as a chapel either.

While some stories usually feel exaggerated or more violent than what they possibly were, it’s really hard to dispute the events going on inside this prison. Although you have to wonder why it remained open for so long while all of this violence going on. And the inmate they interviewed seemed like a perfectly normal guy, so what the devil did he do to end up in such a place? As stated in the beginning, this was for the worst of the worst.

I’m sure a lot of their experiences are simply because of the mood associated with the place, but if they get enough activity, something credible might come out of it.