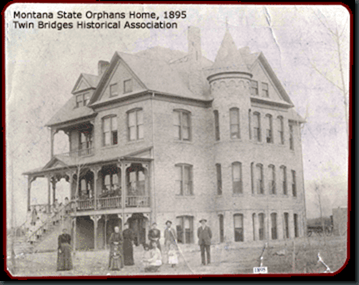 The next Ghost Adventures episode takes us to Montana and the Twin Bridges Orphanage. Things immediately start off with Zak asking people if they’re afraid of the darker side of hauntings. Before we even step foot inside, Zak is laying the foundation for a demonic encounter. The idea of an orphanage never paints the picture of a contented child or happy memories, but Zak is wildly jumping the gun.

Twin Bridges was opened in 1894 and boarded around 5000 children until it was closed in 1975. Most of us would associate an orphanage with cruelty and poor living conditions, and regrettably, this place lives up to that image in every respect.

We hear stories about children getting whipped for wetting the bed. Children were dropped off at the door by parents who couldn’t take care of them. They were forced to do labor the adults should have handled. And this is confirmed by Janie Wasman, a wretch of a human being, who gleefully acknowledges she stuck a boy’s head in the toilet because he kept sighing at her. She has no qualms admitting that story and even laughs at a few others she holds back. It’s pretty clear she took pleasure in emotional and physical abuse. And she wasn’t the only one. There is a journal entry by a boy who was whipped on a daily basis and the matron set herself a goal to make a strong willed boy cry. When she broke him, she smiled at her achievement.

Besides the abuse, there were the usual cases of disease that took the lives of the children. On multiple occasions, the facility would be quarantined. Several children were buried on the property, but their headstones have since been lost. There is however a small plaque in the local cemetery listing their names. Small conciliation.

There is no doubt the matrons of the orphanage were the worst kind of people, but does that make this place haunted? And what evidence do they have? There are claims of children singing and Kurtis says he saw phantom children playing basketball. That’s all they have, but it hasn’t stopped Zak from saying there is dark energy lurking.

For the investigation, they split up into two groups, with Billy and Jay going to the gymnasium, while Zak and Aaron go to the largest building called The Castle.

Within the castle, Zak hears footsteps, and sees the footprints of a child. However, when a pigeon flies out and makes Zak soil himself, he has to admit the demonic energy they’ve been experiencing is just an animal. And much to his chagrin, the footprints turn out to be those of a raccoon. This also confirms that so many of the other cases where Zak hears footsteps and scratching can easily be attributed to animals living in abandoned buildings.

Over in the gym, Billy claims to see a shadow figure and as we should expect by now, Zak points out light anomalies floating around. But as they head to the pool area, things get exciting. They hear the sound of children’s voices and a ball rolls out of the supply closet and falls in the water. Once there, it miraculously moves on command. To add to the excitement, the Ovilus says the name Carol, followed by the words, twist, laugh and cleansing. Zak takes this to mean his twisted  position on the pool ladder.

A ball moving in a water is not a paranormal event. Neither is that ball rolling out of supply closet.

It’s a pretty massive stretch to tie that all together, but Zak is a master of stretching his theory to fit his evidence. While there may have been sounds of laughter, which could have come from anywhere, despite Zak saying they’re in the middle of nowhere, there are no signs of the demonic that Zak tried to sell in the beginning.

The only evil in the orphanage were the mentally unbalanced and hateful employees who took pleasure in mental and physical abuse. But take comfort. By looking at Janie, cancer is eating away at her miserable life.