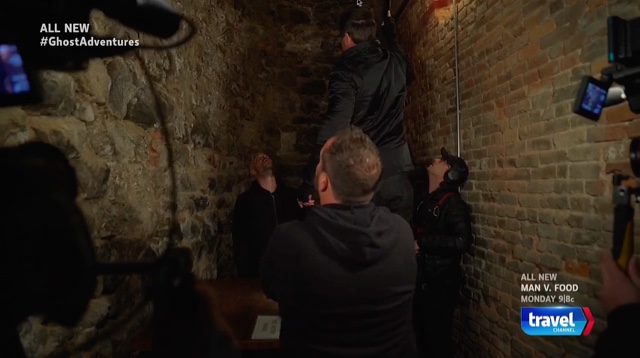 It’s another visit Washoe Club, which Zak says it will be their last, since they won’t be coming back. Right from the start, Zak explains the spirits are powerful and dangerous, to the point where Zak has been receiving messages to come back. As such, they feel the need to keep their distance until the lockdown. Except that they don’t.

Even though they have investigated here before, Carl, the tour guide, says there are untold stories. In 1873 there was an explosion where 12 people were killed. Clearly a story that didn’t make it to the papers.

Carl has also been witness to 26 people getting scratched.

Another story that must have escaped the media is of a man named Scottie who supposedly committed suicide when his son died from falling into a mine.

To start things off, as they stand next to a flaking stone wall they are both shocked and stunned when bits of debris begin to fall down.

Out of nowhere, Aaron claims he feels the presence of Debbie Constantino. When there is a female voice on the recorder, there is no surprise they say it’s Debbie.

As the actual investigation gets underway, Zak immediately says something enters him. On the SLS camera, for an instant, they capture a stick figure. When Zak captures a male voice on the spirit box, it causes him to jump back and say again that something shot through him.

Using recorders from their previous visits, Billy is overcome as he remembers the Constantinos and sends himself into an emotional tailspin. But on the recorder, he gets, “Billy’s upset, okay?” Again, they feel this is Debbie.

As they group back at the command center, they hear footsteps upstairs. Aaron goes to investigate and gets the word, “Hi” and “Shoot” which they associate to the man who shot himself. This is the only divergence from the investigation centering on Debbie.

In the ballroom, as Billy is setting up, they have a flaky camera. When Zak goes to see the nature of the problem, they hear a coin drop, from somewhere off camera, in the darkness. It turns out to be a shiny quarter with a date of 2015 on it, the year Debbie died. Somehow, the spirit world is capable of materializing the proper year coinage from the ether. A coin falling out of someone’s pocket or being dropped when no one is looking is far less likely to be the cause.

This is followed by the words, “Communicate”. When Zak asks who the coin is for, they get “You”. When asked who it’s from, they get “Us”. It’s Debbie with a message from the great beyond because it’s so specific.

They don’t need any more convincing, but the final words of “Coins” and “Portal” seal the deal. Even though those tragic events took place elsewhere and despite the many claims of demonic and powerful forces, they are all convinced Debbie Constantino is making contact with them. Since they investigated there before, and because there is a lot of Ghost Adventures memorabilia it is their spirits that linger. The earlier foreboding tone of messages and visions, not to mention, “the spirits hate us”, are quite counter to what they claim to capture.

Without a doubt, the events surrounding the Constantinos were tragic, but Zak’s own claims explain away their presence here. Why would their spirits be lingering in this place rather than were the incident occurred?

Did they really capture evidence that points to the Constantinos? There is a lot of emotion and wishful thinking going on here. If the energy stays where the events occurred, as they claim, this isn’t where they need to be investigating.