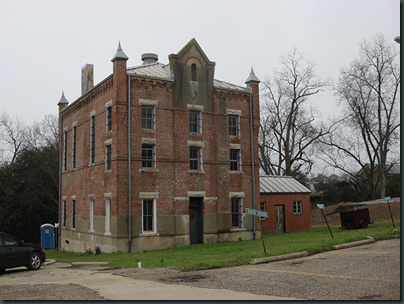 Our next outing with Ghost Asylum takes us to Union Springs, Alabama and the Pauly Jail. Built in 1897, it’s a small jail meant to handle the local trouble and hold about 100 prisoners, but it’s seen some ugly times. There is the story of Aberdeen Johnson, who was forcibly pulled from his cell and hanged at a nearby tree. But that’s not all, he was then shot 150 times to make sure the job was done right. There is also JW Man, a guest of the local constabulary who ended up setting his cell on fire while sleeping off his inebriation. It’s said he was smoking in bed and things turned into a total blaze. Of course it didn’t destroy the jail, it only affected him.

As they begin their baseline sweep they get the words, "drunk" and "ashes" and blips on the K2 meter. As they continue their tour, they get the words, "unjust" and "malicious". When they start the investigation for the first night, there is quite a bit of tapping within the cells and a video feed for one of the cells begins to flicker.

They try to stir up the mood by showing images of civil unrest. After doing so, they hear noises, perhaps a whimpering sound and beeps on the K2. It’s also at this time they feel they hear a female voice down the corridor and motion sensors start to go off.

For Day 2 they build a Devil’s Toybox which is a series of mirrors that all look at each other and create an infinity image. Their intent is to capture some form of energy within the box. They try once again to communicate with Aberdeen and JW Man and while doing so, the FLIR imager flickers wildly. They also hear the sound of keys rattling. The phonetic generator tosses out the words, "bracelet" and "thick".

The night wouldn’t be complete without a reenactment, so they stage a hanging using the trap door within the jail. The toss down a hefty bag of rice which causes lights to turn on and meters to wail.

The regular evidence isn’t all that exciting, but the analyzed evidence does have some interesting bits. On two separate occasions, it appears there is a figure walking past a light source. They also have a thermal image capture of something round in the window that moves off and disappears.

Now, these could easily be duplicated as someone just walking around and they didn’t realize they went in front of the camera. These guys are wandering all over the place, they may have gotten in the shot inadvertently. And the FLIR image may be a reflection of one of them moving down the hall and it creates the ghostly apparition image. So, they can be explained, but is that what they are? Strangely, this location actually seems to have some things going on. Sure, there are the usual noises and bangs you would expect from a place this old, so I don’t think those count as anything other than expansion and contraction as day turns to night.

I’ve also noticed a pattern with Brannon. He keeps going down the demon road. He continually asks if something is a demon or evil. He’s played that card one too many times in my opinion. This is the same thing Zak has been doing where he plants the seeds of the demonic in order to raise the hype. Some would say this is "leading".

From what they have, this jail isn’t any worse off than others they been too, but those figures moving around are worth another look. At the moment, it’s just as likely one of the guys or cameramen walked in the wrong place, but that’s probably the most interesting piece of evidence they’ve captured so far.