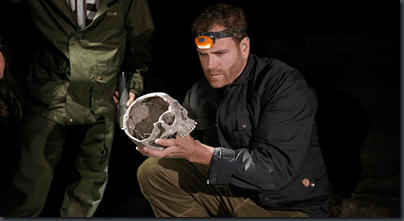 For this episode Josh is heading out to Romania and Bulgaria in search of one of the oldest legends, the vampire. We know the vampire tale has it’s roots in Transylvania with that of Vlad Tepes and the much fictionalized and romanticized tales of Dracula. But, with each legend there is some kernel of truth, so where does that start with the vampire? For this part of the world, that story starts with the Strigoi, an undead creature who feeds upon the energy of the living. The people of this area still believe in the power of the vampire, so much so, that just recently a group of men dug up the grave of a man who they thought was turning into a Strigoi, pulled out his heart, cooked it, and used the essence to create a potion to cure the townspeople that had fallen ill and had seen visions of the man in their dreams. It’s all pretty damn strange.

The adventure starts in Bucharest with Josh riding a sweet motorcycle with a coffin as a sidecar. He travels to the local market that happens to be amidst the ruins of an old cemetery. Vendors are selling just about every trinket you can imagine and of course there is plenty of imagery and tribute to Vlad Tepes.
Josh meets with Oliviu, who takes him down into the ruined Tepes castle. Now, despite what some people would like to say as they go hunting for evil spirits, Dracul means dragon, not devil or evil. And Vlad didn’t stick people on spikes so he could feast on their blood, he wanted to scare the crap out of anyone who would invade his country. He had a small army and thought it would be best to instill fear into the advancing armies. If you saw people impaled on spikes as you approached to invade and thought it might be your fate, you might turn back.

But anyway, Oliviu talks about the Strigoi and how the legend is deeply entrenched in the minds of the farmers and people who live outside the city. In fact, Josh is told to head just out of town to the abandoned church where a Strigoi is supposedly living. Who could pass up an opportunity to hang out in a spooky cemetery with a supposed vampire lurking around?

Josh arrives just as it’s getting dark and the church is indeed a ruin. The ceiling is collapsing and the cemetery has been abandoned. However, he discovers that the sarcophagus is actually open. As he peers inside, what should greet him? Oh yes, a cat leaps out of the tomb and scurries off into the night. With pants soiled, Josh realizes that the myth of the Strigoi is just a bogeyman that people conjure up in scary places.

Some take it to an extreme though, and Josh heads to Craiova, where the villagers dug up the body. The story goes that once Petra Tomo died, people of the village got sick and saw visions of him in their dreams. This was enough to mark him as a vampire. So the villagers dug up the body, cut out the heart, cooked it to make a potion that the affected townspeople drank. Right after that, they were all better again and the anti-vampire ritual was deemed a success.

Josh ends up seeing the police record of the crime and says it’s incredibly violent. The men were given a suspended sentence of 6 months for desecrating a grave. Oddly, Josh heads out to the cemetery where the man was dug up. While having a look, some angry villagers arrive on the scene and it looks like another violent incident is about to break out. Turns out, one of them is related to a man who actually took part in the deed and agrees to take Josh to meet him. Oh this looks bad indeed as the translator bails out and leaves Josh on his own to go into the woods to meet some guy who is perfectly capable of digging up the dead and eating them.

Turns out the man was convinced Petra Tomo was turning into a vampire since he had blood around his mouth and that his skin and hair were still growing after he was dead. Of course, this is normal decomposition for a body and has nothing to do with vampires. But that doesn’t matter to the locals and not only does he not have any regret about what happened, he explains it’s not the first time that sort of thing has happened. He’s adamant he did the right thing and a bit offended Josh is second guessing him.

From here Josh heads to Bulgaria to participate in an anti-vampire ritual of a village. He meets with Ivo, an anthropologist and together they head out into the woods to pick some herbs to be used in the ceremony. They look for the verbena plant which is poisonous so the roots will grow down and poison the body, keeping it from rising up. Of course, to get to the plant, they have to cross a bridge that first made it’s appearance in The Temple of Doom. Without falling to their death they grab some plants and relocate them to the very meager and sorrowful grave in an abandoned part of town. Once done, they head to find the villagers to let them know the deed is done and find them working on their own ceremony.  The villagers are dancing across hot coals in the shape of a cross. This will help ward away the evil of the vampire.
Now that Josh has seem some of the hysteria first hand, he heads to meet Nickolay, an archaeologist who has found the grave of a man who was believed to be a vampire. Why does he make such a claim? The man had a metal spike shoved this his neck which secured him to the coffin he was buried in. This was clearly done on purpose and after he was dead. This wold have been to prevent him from rising up.

Since Josh is dealing with men of science, they agree to let him take some DNA samples to be analyzed. Turns out the man suffered from porphyria. This is a condition that among other things makes people sensitive to light and which can cause the gums to recede which gives the impression of fangs. In simple terms, it is the condition that causes the maladies that people have been associating with the vampire. It’s just a medical condition they don’t understand. This is the correlation people have made with mental disorders and being possessed by the devil. Unfortunately, all these desecrations are taking place over something they don’t understand. The townspeople have seen something gruesome, so this is a response to that fear.

There really is no basis for the vampire, just misunderstanding and a lack of medical knowledge. But the myth is certainly alive and well and judging by the attitude of the people, that myth isn’t going anywhere.