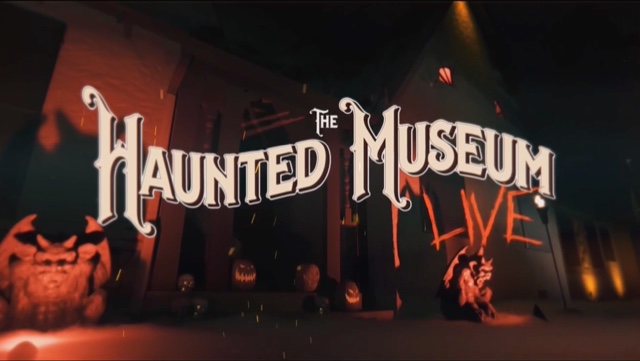 It’s been nearly a decade since the last live investigation that was wrought with dubious actives and evidence collected, but Zak and the team are back, under more controlled conditions, to investigate his own haunted museum. They will investigate some of the most haunted and cursed items his museum has to offer including, Lilly the Haunted Doll, the Mirror of Bela Lugosi, artifacts from the Demon House, Peggy the Doll, the Dybbuk Box and even a chat with the Zozo Demon.

On hand is a bevy of guests including, Chris Fleming – Paranormal Expert and Medium, Michael and Marti Parry – Medium and Psychic Artist, Patti Negri – Psychic Medium, Darren Evans – Self-styled Demonologist, Gary Galka – Paranormal Inventor and Engineer, and Bryan Ouellette and Sister Mary – Holy Nicholas Catholic Church, with each taking a turn on the catwalk to look as sinister and foreboding as they can muster.

Besides the guests we have seen on past episodes, we get to hear from some of the employees at the museum. Many tell of strange experiences and events that have transpired on guided tours and after hours. Some claim to hear voices and see shadows. Some say they have been scratched, given nose bleeds and even burned.

Mind you, this is Zak’s museum, a place he has spent millions putting together and collecting for. It’s also a place he has total control over. Are we really expecting anything other than Zak to say it’s haunted? That would hurt ticket sales and make him look silly.

Things start off in the Oddities Room and Lilly the Haunted Doll. Lilly is supposedly inhabited by a strong spirit and was so dangerous she was originally sold off from an antiques store to a young girl. Now she resides at the Haunted Museum and to protect onlookers, the evil is contained by a sheet of glass.

We are treated to Zak taking Lilly out and holding her for the first time. While some may gasp in shock and horror at his bravado and tempting fate, nothing else happens and despite the claims and the human hair atop her crown, Lilly proves to be silent like other dolls.

Next up is the Art Gallery where Dakota confronts the evil image and demonic forces contained within a mirror from a home Bela Lugosi used to own. Despite the claims, there is no evidence Lugosi personally used this mirror or practiced the art of scrying. With all the Hollywood gossip, there is no existence of that story.

But the last time this mirror was unveiled, people became weak in the knees and collapsed to the floor like a sack of potatoes. To see if history repeats itself, Zak leaves Dakota alone with the mirror, telling him to stare deeply into the abyss to see if he can make contact with the negative energy trapped inside.

However, is that what really happened? When we return to the room, the mirror is perfectly covered and Dakota is many steps away. It doesn’t look like he paid attention to the mirror at all. Despite this, both Dakota and Zak say things are active, there is energy and they should be somewhere else.

A fun (not) twist to the evening is the addition of Lady Snake, who’s been down in the basement conjuring all day. She won’t say what she’s been up to, or what she let is, but instead acts like a 5 year old who’s peed in the pool and laughs at everyone swimming in it. She keeps repeating, “it’s a candy shop” and giggles.

The battle between light and dark, good and evil is just beginning, as the often jittery and disoriented Patti Negri shows up on the scene. Zak brings these formidable opponents together and what ensues is some of the worst dialog and acting I have ever witnessed.

Moving on to the next cursed item, we have the most dangerous wine cabinet in history, the Dybbuk Box. It supposedly contains pure evil, was once buried in a secret location, then sold on eBay before coming to Zak. We are witness to great angst and personal turmoil as Zak wrestles with himself over whether or not he should open the box.

They struggle, they resist, they nearly give in, they regain their sense, they shake their fists in madness and frustration, they storm from the room only to return moments later. In the end, despite all the anticipation, build up, and faux anxiety, Zak decides not to open the box despite the fact he took the glass case off. Good thing a ring of salt protects the world from the wrath of pure evil.

Speaking of pure evil, it’s time to visit the set of Demon House. This is the home where over 200 evil entities were claimed to take up residence. In fact, the house was so haunted Zak made a movie about it, then destroyed the place. Except not all of it. He held a little back to exhibit at his museum.

Tagging along to tell the tale of how dangerous the place is, we have Chris Fleming. With a Spirit Box that barely spits out a word, Chris describes how bad the Demon House was in vague details, except for the 12 foot demon walking around.

Again, the location was so dangerous and most likely had entities attached to the very fabric of the house, that they decided to bring parts of it back and put it in display. But this time, no glass to keep the spirits in check. The stairs and the pure demonic energy are completely exposed and for a small fee, you can cast your gaze upon it.

It’s now time to visit Peggy the Doll, a doll so haunted she can cause nosebleeds just by making eye contact. Several employees describe people getting sick, having car accidents, nose bleeds and even heart attacks because they looked into her eyes. She’s even told people to die when they ask how she’s doing-through a Spirit Box of course. In fact, she is so dangerous she only needs half a sheet of glass to contain the negative energy festering inside her.

Staysha and Shealee, who keep the mascara and eye shadow industry in business, come in to say hello to Peggy. Once again, Zak makes a big todo about taking Peggy out and handling her for the first time.

Both employees handle Peggy, and even stare deeply into her eyes. Even Zak takes a turn, but he’s not bold enough to stare her down. And just when you think demonic voices will emirate from the Spirit Box or the blood will flow, nothing happens and we move on to something else.

And that something else is self-styled demonologist Darren Evans and the Zozo Demon game. Even though Zak has repeatedly said the Ouija board is dangerous and not something he likes or even wants to mess with, we visit the seance room where Jay and Darren plop down in front of a Ouija Board.

To build atmosphere and charge the room with electricity, Joshua Warren plugs in the Jacob’s Ladder.

No prizes will be awarded for guessing Darren is able to spell out the word Zozo on the Ouija board. In fact, every board he works with should have the rest of the letters removed to make communication easier. But before Zozo can cause any havoc and devastation, the episode is over and everyone heads outside to enjoy the rest of their Halloween night.

We had conjuring, we had not just one, but two creepy dolls, we had scary wine boxes, we had remnants of the Demon House, we had witch battles, and we even had a visit from Zozo. The only thing we didn’t get was evidence.