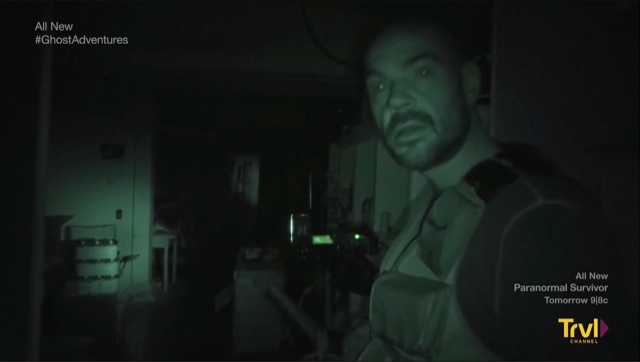 I’m a little behind on the uptake, but Zak and team are back with investigations along the Graveyard of the Pacific. This will include several locations along the Columbia River in Oregon. The first stop is the Astoria Underground, which is a series of maze-like tunnels that were build to replace the wooden stilt-like structures that kept the town above the rising water levels. In 1922, the town caught fire causing massive damage because of the wood supports. Now the tunnels are a dumping ground for debris and detritus.

Right from the start, Zak refers to the tunnels as, “That’s where the secrets are kept,” and “Dark and oppressive forces that linger in the underground.” To prove his point, he speaks with Ross, an investigator who claims he captured something on camera. He chased a dark mass into the underground and his proof of it’s presence is the sound of knocking.

Zak then relates the story of Bunko Kelly, a man who kidnapped people and sold them into slavery, also known as the act of “Shanghaiing.” This fuels the dark energy of the past.

To get a glimpse of that dark energy, they meet with Diana, who shows them into the tunnels from an access point in her shop. She is quick to say, “I know someone died here. It’s what I feel.” While some would have a few choice words for her zoned out behavior, Zak says the tunnels are affecting her.

We then have a series of bizarre and rather nonsensical connections between Astoria, HP Lovecraft and Diabolus Rex of the Church of Satan.

Zak tries to contact Grant Cogswell, who filmed “Cthulhu” in the area a decade earlier. When the connection won’t establish itself, Zak chalks it up to a paranormal influence. The story is a little hard to follow as Grant claims there was a curse over making the film which ultimately bankrupted him, ruined his career and forced him to live in Mexico for a decade. The subpar rating had nothing to do with the situation.

It also put him in contact with Diablous Rex, who liked the idea of the story and Lovecraft and wanted to invest in the film. These connections feed the dark energy. If that sort of random connection were valid, wherever Stephen King sits, is the most haunted place in the universe. It’s hard to understand what point Zak was making here.

Zak then claims he and his crew are working under a similar curse when Dakota and Bacon get stuck in an elevator at the hotel.

With all that behind them, it’s time to start the investigation from two points. Zak and Jay enter the tunnels from the Liberty Theater, where Ross claims he saw a dark figure. Aaron and Billy enter from the butcher shop where zoned out Diana claims murders took place because she can feel it.

At the beginning, Zak hears bangs and says something rushed at him. Luckily there are two dust particles to support his claim.

In a long, echoing chamber, Aaron and Billy hear talking. As Aaron is on edge, a bug zips passed his head and he nearly soils his pants. This is followed by a bang. A bang in a corridor filled with crap of every description. Even Billy thinks it’s a piece of wood that fell over.

As Zak explores further, he finds a set of stairs. Like in so many other episodes, he becomes confused and disoriented, saying there is a force surrounding him. He grabs the Ovilus device and gets the words, “Mad, Ashes, Up” which refers to the fire and the city burning to ashes up above them.

On the other size, Aaron again feels something against him, which he thinks is a rat. Once more, they are thrilled to find dust particles circling about to coincide with the event. Ironically, Jay and Aaron admit, “It’s not that there’s something paranormal, it’s the feeling you get from being there.”

Zak brings out his digital recorder and somehow hears the words, “fight me” as a response. He then claims to capture a bloodcurdling scream, which sounds so very much like a crow. When asks, “What did that scream mean?” He gets a response of “Release, Known, Empath.”  Since Zak now claims he’s an empath, the spirit is looking to him for release. Or it was a crow.

In adding yet another half-baked experiment to their bag of tricks, Billy pulls out his phone and Bluetooth speaker. He’s going to use Aaron’s phone to call his phone and play it over the speaker. With all this exciting wireless and EMF activity, it’s a conduit for spirit energy and they can contact the spirit world.

It clearly works as they pick up what they claim is a girl’s voice and someone saying, “We can talk back.”

Because of this staggering evidence and the fact Jay fell in a hole while wandering around in the dark, Zak is convinced they have documented enough evidence to validate the dark shadow figure.