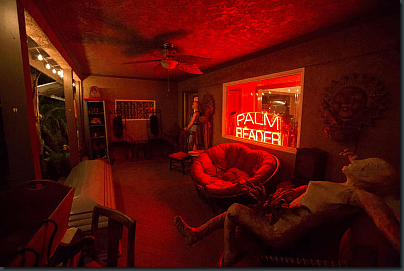 Our next outing with Zak and crew takes us to the San Fernando Valley of California and a house decorated like a side show carnival. Unfortunately, the pink neon and unique statues mute that this was the scene of a home invasion that turned double homicide in 1996.

Scott Thompson and his wife Becky have lived in the house for 6 years and have a trove of morbid antiquities, similar to Zak and his museum in Las Vegas. There is even one called Agatha which Scott says is active, but he keeps it under glass.

As Zak goes to the scene of the murder, he says there is a heavy feeling of sadness and is hit with a blast of cold air. Going with the same idea from the previous episode with Elmer, Zak doesn’t believe the couple have accepted their death because it happened too quickly.

Zak talks with two of the kids who live in the house and both describe nightmares that involve acts similar to the real events. Gracie has dreams of demonic voices calling to her from the kitchen, while Griffen has seen both his parents murdered. Considering the events and the curios of the house, it’s not surprising.

Unfortunately Zak brings in Patty Negri, the Psychic Medium we have seen before. She is quick to grab at her throat, toss herself to the floor and fidget wildly. And with her at the helm, it’s time to do a seance.

While she rambles and claims a flickering candle is evidence of spirits, we find out that Scott is wearing a military dog tag style necklace with 666 on it. Zak uses this as pathway to further his idea of demonic energy. Zak gains the support he needs when they ask, "what is the dark energy here" and get the word "killed".

With the seance over, they begin to investigate the house. In the kitchen they get a stick figure on the SLS camera. The word. "Help", comes through the spirit box and they make the connection these are the voices Gracie heard.

Things take an odd turn as the car alarm of their rented truck goes off and they rush outside. This leaves Jay alone in the attic and they conclude this is the work of the entity trying to separate them, although no harm is done to anyone.

As a final act, Zak takes the doll Agatha out of the case and asks questions. The doll doesn’t feel like answering questions, but when they ask for a name, they get "I killed". We are now moving toward the doll being the instigator of evil within the house and Zak feels the house needs a cleansing in order to protect the family.

There was certainly a tragic event here, but in reality, there is nothing out of the ordinary other than the odd decor. The dreams are caused by the real events that happened and are  brought to the fore by the abundance of creepy fixtures. It’s no different than dreams after watching a scary or intense movie. Scott’s necklace with 666 on it is no more sinister than the temperature reaching, 66.6 degrees. It’s simply a number, and depending on how you want to take it has nothing to do with the demonic and isn’t even the number suggested.

When it comes down to it, what Scott has created is no different than the museum Zak has put together. They’re both interesting, but hardly haunted. Personally, I think Scott’s house is pretty cool. I think I need a Palm Reader sign in my window.