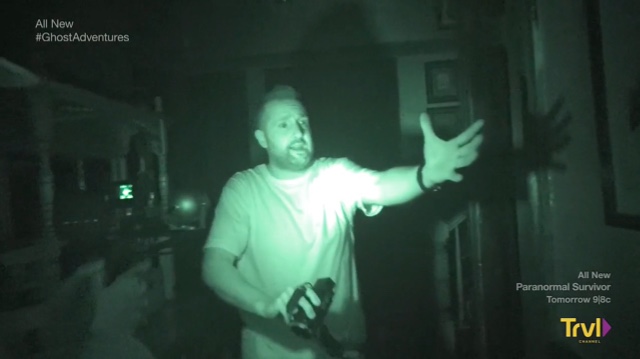 For the next investigation, Zak visits the Westerfield Hotel, a location with a “demonic infestation” due to visitors such as Anton LaVey, Kenneth Anger, Bobby Boselie and Charles Manson. The first two being associated with Satanism, the latter with murder.

Rituals were conducted in the tower and were even filmed for some highly dramatized and most likely drug induced footage. There are claims that portals to Hell were opened inside the house and Zak believes he was drawn to this house because he bought a model doll house of the Westerfield Hotel from an antique shop.

They speak with Kenneth Anger who says they performed “summoning ceremonies”, and that they were “calling for entities.” Zak is chomping at the bit for Ken to say they tried to conjure up the Devil and that he “created a residence for Satan himself.”

Zak steers the conversation to Ken and his affinity for the works and beliefs of Aleister Crowley. We also hear about how those with substance abuse problems fall victim to the darkness of the house.

At this point, Zak has done everything he can to whip up the cliche and hysteria of the “Satanic Panic.” To tap into this darkness, he and Jay will perform their own ritual in the tower, to “open the gates” (of Hell?), but rest assured, when they perform conjuring it’s not black magic, Satanic or Devil Worship. Even though reading from a book of ancient Sumerian text is too dangerous to acknowledge or allow the words to be captured on audio, rest assured, this is merely in the name of research and exploration. Funny how he doesn’t see that for anyone else.

As they get started, they hear the usual creaks, bangs, pops and the sound of footsteps associated with an old house. They also hear clicks and burps on their walkie-talkies, which are the demonic entities trying to make their presence known. We even get the declaration of a cold spot and a sighting of Anton LaVey.

Their conjuring must be working because the Talking EVP throws out the word “Rage.” It should come as no surprise that right after, both Zak and Aaron act like they’re being taken over by some sort of unseen force. At least we don’t have the previous throwing of devices or punching of firsts into the wall.

Aaron leaves the room to investigate downstairs, but claims he is stopped on the stairs by an invisible wall. Since it’s invisible and can’t be recorded, we have to take Aaron’s word for it.

Meanwhile, on the Spirit Box, a demonic conversation is heard. One voice asks, “What do you want?” Another answers with, “you.”

After heading back upstairs, Jay and Aaron both claim to see a shadow figure atop the tower which is supposed to concentrate the spiritual energy. The hacked up SLS camera confirms there is a stick figure afoot. But it’s not just a stick figure, it’s a goat figure. No wait, is a three legged creature. No wait, it’s pouring stuff on Jay’s head.

We finally have a disoriented Jay trying to leave the tower, yet there is another unforeseen force blocking his path. Not only is this powerful entity stopping Jay from walking in a straight line, it’s capable of knocking over a camera placed on a tripod. Then again, it could have been gravity. Or gravity and a faulty camera leg. Or a camera placed on a bad angle.

While the history of the house is intriguing, they certainly don’t capture anything that lives up to the “demonic infestation” and “residence for Satan.” Ironically, LaVey didn’t believe in a God or a Satan. They were merely symbolic and the antithesis of other religious beliefs. It’s not worth getting into a debate about such things, but it’s pretty obvious Zak latched on to a few keywords and ideas and tried to whip up the flames of panic as much as he could. Too bad his evidence doesn’t support anything of the sort.