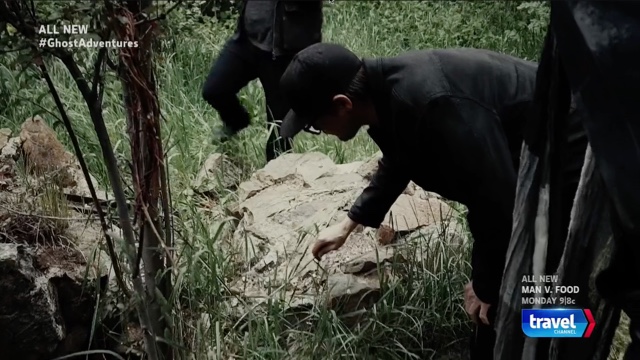 For their next paranormal excursion, Zak and team head to Kaysville, Utah to visit Kay’s Hollow, where cult leader Krishna Venta set up shop in 1951. But his zealot ways didn’t last long as he was murdered by members of his congregation. Many years later, most likely a random act of destruction, the stone cross erected to him in the woods was blasted apart and is now a ruin. However, Zak claims the cross has ultimate negative power because there have been two deaths on the property and since graffiti of pentagrams have been painted, it’s now a place for suicides and Satanic rituals. In fact, it’s a “central hub of evil.”

The power of the cross is confirmed when Goth Girl Bennet, who has visited the area nearly twenty times, describes her first experience where unseen voices guided her to a hidden path and had conversations with people that couldn’t be seen. Her body was taken over by a female spirit who was intent on “giving her over” to a male spirit. Even though it takes a toll on everybody, she keeps coming back for more.

This story is confirmed by vampire look-alike, Vincent, who says he saw the whole thing. He too has been to the Hollow multiple times and has many stories to convey. One “legend” states the area is overseen by “dog men.” Another legend states if you lie on the ruined cross while the moon is full your skin will burn.

He takes up the challenge, lays on the rock, then claims he got 3 burns in the shape of an upside cross. It’s a good thing he made sure he didn’t lay down on any stray branches or oddly contoured surfaces or someone might believe the legend was true.

On their way back to the car, they just happen to find a bag tucked away, in the scrub, out of sight, near the cross. When they open this chance finding, it has animal bones and berries inside, which Jay immediately says is an offering and has to bury again, complete with ritual.

They then talk to a resident who freely admits that her son saw glowing red eyes in the forest, that she has heard growling in the woods, that her daughter saw a figure poke itself out from behind a tree and that chickens were slaughtered and left in a circle. But have no fear, none of this has given her cause for concern and she still lives in the same place.

As the investigation starts, Zak hears a “crashing sound” in the woods using his parabolic microphone. Since animals don’t live in the woods, the source of this noise must be both paranormal and demonic. Zak follows this up with claims of an invisible entity pushing past them. Aaron then adds he saw red eyes. Billy jumps in saying he saw the shadow figure as well. Too bad not a single piece of it was captured even though they saw it, “with their own eyes.”

Making their way to the ruined cross, they get all sorts of unexplained heat signatures. They seem to have forgotten the idea that rocks hold heat and will have hot spots under a thermal imager.

When they get near the cross, it’s Billy’s turn to zone out and become disoriented. Zak immediately says they are next to the hanging tree, even though they can’t see anything. As an afterthought, Zak adds that he felt the energy surrounding Billy as he was coming up the path. Too bad he didn’t tell that to Billy beforehand.

Then, as though compelled, Zak jumps onto the cross, much to the shock of all concerned. As expected, he begins to zone out and claims to have visions. He’s now channeling Venta.

While on the rock, he gets a spirit voice with the word, “Remembering”. When he gets down, no more spirit voices. The fact there are no voices is more proof of a controlling entity.

Continuing to investigate the area, Billy goes into a trance and claims there is an invisible force that won’t let him pass. The entity tries to take him over, but a few stern words keeps it at bay and he’s able to continue.

Another sign of devil worship makes it’s appearance as a bone is tied up in a tree. At the same time they hear unexplained sounds, which sound exactly like a dog, coming from the woods. This coincides with the location of the iron gate that Bennet passed through when she was possessed. To add to the mystique, Billy claims the air is filled with the smell of rotting flesh.

Zak then unveils an extremely perplexing experiment. He’s going to call Billy’s phone, which is on the cross and connected to a BlueTooth speaker. This will create a conduit for entities to speak to him. And it works, he gets static. Phones never has static except when under the influence of something paranormal.

Then, as they are leaving, they get what they claim is an unexplained squealing sound. It’s a sound that comes across remarkably like ducks, but to Zak, this is some sort of demonic sacrifice.

Even with this lack of tangible evidence, Zak claims this is an insanely dangerous area. it’s amazing how easy it is to conjure the devil and open a portal to Hell. Apparently all you have to do is go out into the woods, lay down some poorly scrawled graffiti, then knock on the door and the devil will answer.