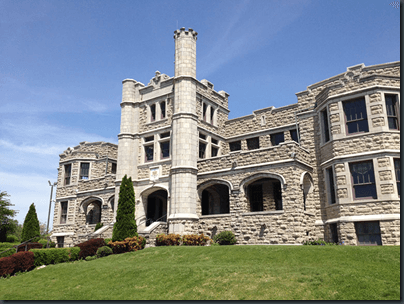 Striking out to Springfield, Missouri, Zak and his team investigate the Pythian Castle, built in 1913 for the Knights of Pythias. It has since been an orphanage, nursing home, tuberculosis ward and interrogation center for prisoners of war. It is claimed that 100 deaths have occurred in the hospital (most of which would be due to tuberculosis not something demonic), including suicide by gunshot to the head with a rifle and a man who slit his own throat. These last two most likely brought about by mental suffering.

There has been a more recent suicide, and one that came with a premonition. Cindy, a tour guide, says she had a dream about her brother’s death while staying in the castle for two nights. She also saw a floating, "white lady" in the bedroom.

We later hear that Cindy’s brother suffered from depression and took his life three weeks after staying in the house. Zak is clearly trying to link that sad event to the castle. And a premonition about a troubled sibling doesn’t sound mystical either.

During the interviews, Zak hears a whistle-a siren call of evil tidings, and a jumbled voice he takes for a German prisoner. This is followed by the explanation that a heavy radiator fell over the same night Cindy’s brother died. How is a radiator falling over and a death linked? A radiator falling over is due to a weak floor not spirit energy.

Moving to the POW area, Zak and only Zak, sees a head with glowing orange eyes. When asking what it was, he gets a reply of "a demon." This is followed by, "don’t tease it". This confirms Zak’s suspicions they are dealing with a sinister web of evil, full of dark and powerful entities.

Zak claims a Doppelganger is at work, and this entity has caused people to take their lives, rather than illness. This is confirmed by cold air as Jay and Zak talk about two previous suicides in the early 40s.

To start the investigation, Jay is locked in the POW basement area. It’s so frightening he falls asleep. However, he is woken up by a loud bang that Zak feels is caused by the ball of light he sees on the camera.

With Jay napping, Zak, Aaron and Billy head to the bedroom where Cindy stayed. Stumbling in the dark, Billy hits a chest by the bed. The pain incites a stick figure to appear on the wall for just an instant. This is followed by a pricking in Zak’s thumb. (It’s too easy to make a joke about that one)

To coincide with this, Zak, like dozens of time before, says he has an intense wave of panic, doom and aggression. He then commands the entity to leave him alone. He asks who the entity wants and what it is, but only gets garbled noises in reply. When asking if anyone is in danger, he feels the reply is "we’re coming". When Billy sits in the room, he hears a female voice, but again, it’s garbled.

Moving deeper into the building, Aaron heads into the basement tunnels, because it looks creepy on camera, not because anything happened down there. His walkie talkie makes a blip of a noise and he hears what sounds like a leaf rustling. Most likely it’s a mouse or rat or some other wayward animal.

Finally, to test the power and might of the entity that knocked over a 600 pound radiator, Zak sets up some blocks. While nothing happens to the blocks, he gets yet another light anomaly sweeping down into the camera shot.

What we end up with are entities that are so dark, so sinister, so powerful, that they can’t form a coherent word on any of Zak’s devices. The location is also so filled with dark energy that Jay falls asleep. In his delirium of being locked in the dark, he feels he sees extra terrestrials. This shows how easily the mind can be tricked.

While the recent suicide is sad, it has nothing to do with the castle, despite the links Zak is trying to make.