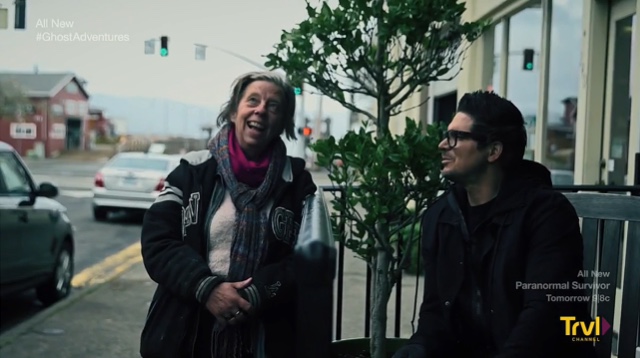 Continuing their tour of the Graveyard of the Pacific, our next stop is the Norblad Hostel, where there are claims of demonic attacks. The Hostel used to cater to an unsavory crowd where violence was common. It’s now been turned into a more upscale establishment, but since it connects to the, “Underground”, it’s loaded to the gills with evil.

We hear from Aaron, an ordained minister and tattoo enthusiast, who claims he was attacked by a demonic force. Aaron knows it was a demonic entity because of the nauseating smell. That sort of smell in an unkempt basement full of trash and water damage means a demon lives there. Additionally, he felt pain in his back, like a hand around his spine. Further, the demon caused nightmares and made him wake up in the middle of the night.

Not only did the demon ruin his sleep, it caused Aaron financial trouble, caused his mother to get pneumonia, and flooded his home. Interesting mindset here. Living next to a river and getting flood damage is caused by demonic forces. Like Zozo or the Brownsville Rd demon, when things go wrong, blame something demonic. “Oh nay nay! I’m the victim here! A demonic force is responsible for these events, not my ridiculously poor planning and life choices.”

We then have an encounter with wandering street vagabond, Robin, who appears out of nowhere to say there have been murders in the Underground. How does she know? Because it’s a port town. Duh!

She then talks about Satanic worship, because that’s the sort of thing that happens in tunnels. Duh!

Then, before dropping the microphone and making her big exit, she claims she knows things which would get her killed if she talked about them.

Casting mental health aside, they are desperate to make another connection to Lovecraft. Grasping, they bring up a story where a woman exposes a secret society. She then goes mad from the knowledge and the fact she is being hunted. Well, at least got the “madness” part right.

Even the owner of the Norblad feels the place is haunted because one night, he got a chill on his back.

But, the person who really knows what’s going on is June. She is a Demon Seer, which gives her the ability to see, talk with, understand, and even remove demons. The demon removal portion of her business card is a little lacking since she claims one is still lurking in the corner of the basement.

To prove she has the “sight”, she takes Zak down to the basement, to the corner, where a dark portal somehow manifested and the demon stepped through. Although demons speak in Aramaic, if Zak holds her hand, he will feel and understand this one.

June explains that Zak was meant to come there, meant to understand demons do exist and they are real. They can and will try to hurt you. One cue, Zak gets a jolt and pulls his hand away from June.

Good thing June is a translator for the demonic, as Zak asks questions and June translates the answers. She explains it wants to inflict pain and suffering. And cause financial ruin, because demons are all about the Benjamins.

When finished, June declares she needs to take away the “sight” she gave Zak. No one should be able to see what she sees unless they have what she has. And again on cue, Zak says he feels ill and unsafe. This leads to Zak jumping a car and driving away. Zak certainly runs away from his problems a lot.

But he thinks better of it, returns and has June take away her powers. This involves June placing her hands over Zak’s and standing in silence, for 10 seconds. Her powers are so mystical they defy words.

The investigation starts off with the usual act of cowardice from Zak as he sends Aaron into the basement alone. With Aaron down there, the Ovilus at HQ gives off the words, “Unholy, Sacra Res, Slain.” This basically means the Ovilus spews out words at random from any location whenever it’s on.

Aaron places the microphone near the corner where the demon has been told to stand and gets the sound of a female voice. This is followed by Aaron acting all manner of confused and disoriented. A few minutes later though, he’s perfectly fine and operating the camera as usual.

While investigating, Zak finds a set of stairs that he says are drawing him in. As he gets there, he claims a rock is thrown. This is soon followed by another. Ignore any idea of debris falling from the sheer amount of crap down there.

At the same time, we have a whole series of camera malfunctions. This causes everyone to lose their minds, especially Billy who stomps his feet and acts like a child who’s taken a dump in his pants. He loses his temper at the devices shutting off. Instead of going, “Wow, these devices are turning off because of an unseen force.” It’s “These device are turning off, I’m being mocked so I have to blame someone and kick their ass for it!”

Putting his rage aside, Billy remembers that he needs to feel sick and prove this demonic entity exists by claiming he has back pain. To give further credence, the SLS camera flashes a stick figure on the screen. This is good enough for Zak to say the entity is walking down the stairs to confront them. Although he never actually shows up.

The episode wouldn’t be complete if we didn’t have Zak lashing out at his crew, then blaming the whole thing on the evil entity. It should come as no surprise this coincides with the Talking EVP showing the malevolent words of “Disembodied, Unholy.”

These personal experiences are enough to convince Zak that evil lurks in the “Underground”, even though he admits to never capturing any evidence of said entity.

Now that the episode is over, June can work her magic and get on with the demon removal part of her schtick and save the town. She hasn’t done anything up to this point just to build dramatic tension.

Lovecraft never meant to create a canonical Mythos but rather intended his imaginary pantheon to merely serve as a background element.
At times, Lovecraft even had to remind his readers that his Mythos creations were entirely fictional.