Scream was one of those rare movies that came across as a spoof, yet still had so much bite and it’s own unique story as to let it stand on it’s own. Since this is the Halloween season I dug into the archives and brought out all 3 Scream movies. Yes, there are indeed 4, but we’re just going to look at the original trilogy.

The first movie was quite an interesting take because it sets itself up as a scary movie and gives you plenty of clues as to what you need to watch for. It’s sort of like you’re watching a tutorial. Don’t ever say, "I’ll be right back!" because you won’t. "No having sex in the movie!" "Look behind you!" What’s funny is, Scream points out all these cliché’s while they’re happening in the movie. Of course they mock them and reference dozens of other movies where the same thing happen. It lulls you into a false sense of security, then Scream does the same thing – you just weren’t expecting it.

Once you actually get immersed into the movie itself, it goes about making everyone a suspect. It brings all the central characters onto the screen and shows off some quirk or behavior that could make them the prime suspect. Even, Sidney, the victim in all this is actually shown to have some motives for carrying out these murders.

The movie twists and turns and slowly, like in an Agatha Christie novel, the major characters fall away one by one. You have to keep guessing to see if your guilty party makes it to the end. And then in the typical dramatic finish, there is a big showdown and the big reveal as to why the killer is causing mayhem. And oddly it’s a viable reason and the movie works. Wes Craven has actually pulled off a horror spoof that’s suspenseful with a decent story, lots of action and plenty of misdirection. How the hell did he do that? Most movies can’t get that right when they take themselves seriously.

Then we have the sequel, which we all know is never as good as the first. But as stated in Randy’s film class, the Godfather was as good if not better than the original. An exception to the rule? And perhaps Scream 2 is following in those footsteps, albeit with some bloody shoes.

Scream 2 continues the misadventures of poor Sidness who’s being hunted and victimized because of the sins of her mom. Seems mom was a pretty naughty girl and got a few men in trouble with her feminine wiles. Like a wrecking ball she tore some families apart and those left behind aren’t too happy.

Like the first Scream movie, everyone becomes a suspect. Misdirection abounds and while we’re familiar with the plot and nemesis, we know it can’t be the same person as the first movie, so who is it? Unlike a Michael Meyers who can take multiple shots to the body, our villains in the first movie were dealt with by a headshot. That absolutely put them in the ground, right?

So who’s causing all the new murders and for what reason? Again, suspects start falling one by one and once again, Sid’s boyfriend seems the prime suspect. Even the wrongly accused Cotton Weary is back on the streets and might be looking for some vengeance for that prison time he did. But yet again, Scream 2 comes off like a spoof of itself with the Stab movie showing the events that took place in the original Scream movie.

But there is an actual mystery to solve here and the murders of the young girls coincide with the names of the original murders. There is a nasty copycat on the loose and ultimately Sidney is in the crosshairs.

There is some interesting commentary on violence in movies since when the killer is revealed, a point is made that the defense will blame violent movies for violent behavior. The killer is really the victim and the media is responsible for all the murders. But, there is more of a twist ending here and we have some vengeance that spills over from the first movie and the two boys that were killed.

For the final part of the trilogy, all the rules need to be thrown out, Randy tells us from beyond the grave. Everything we assumed will turn out to be incorrect and nothing is what we believed. And true to that we’re taken on a wild ride into Sindey’s past as they uncover some truth about her mom. It really comes across as dirt since mom was a pretty naughty girl. And once again, everyone is suspect, from the movie producer of the new Stab movie, to the director, to the cast, to a stalker fan. And yet again we have the big reveal at the end that changes what we know about the first movie. All sorts of new information is brought forward that we never knew about. It doesn’t contradict anything, we just didn’t know.

And once again, the whole thing seems to work. It may not be quite as tight as the first and we’ve now come to expect these twists and the attempts at misdirection, but on the whole it’s still pretty good. It’s sort of the like the M. Night Shyamalan movies, you can get away with it twice, but by the time the third movie comes out, we’re onto the game.

Even still, these are by far better than a lot of the other movies out there. There is the typical decline, just like we see in everything else. Saw was good, Saw III was not. Scream is good, Scream 3 is better than most. Either way, there is still a lot of fun to be had with these movies. They comes across as whodunit movies as much as slasher films. They actually have a pretty decent blend of both. It’s certainly a fun nights worth of entertainment and since I hadn’t seen these in several years, since they came out really, I had a great time trying to remember what happened. 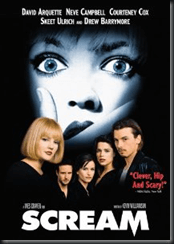 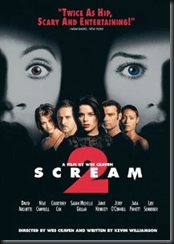 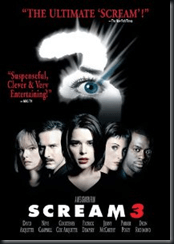