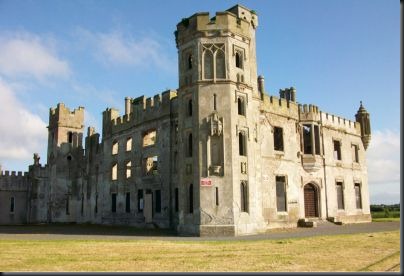 Josh got the band back together and headed over to Ireland for a special live investigation as Destination Truth went in search of the Banshee at Duckett Grove. Josh brought in Jael and Ryder from his previous seasons and enlisted the help of Kris and Barry for GHI. Apparently Allison Scagliotti had so much fun in Chile when investigating the Haunted Mining Town that she made a return visit to hunt for the harbinger of death rather than sitting in the Irish Pub for St. Patty’s Day. This group really knows how to have a good time together.

The investigation is of Ducketts Grove, a massive estate owned by the Duckett family but destroyed by a fire in 1933 and now lies in a rather tragic state of disrepair. It’s said to be haunted by the Banshee and that it has made appearances there for decades. It has been sighted by caretakers and travelers. It’s said to haunt the gardens. And people who pass by avoid the forest at all costs. From the sound of things this place is straight from the Legend of Sleepy Hollow. When they did interviews, just about everyone agreed the place was haunted and that trying to find the Banshee was a sure way to get yourself in trouble. If you see the Banshee you’ll die and if you hear her wail it means that someone in your family is going to die. There is basically no end of doom and gloom surrounding her appearance. So out into the darkness to find her!

Since Barry is Irish, Josh asks his opinion about the Banshee. Barry admits he’s heard the wail twice and both times a family member has died. They interview another witness who also heard the wail and he claim his mother passed two days later. He also says she was ill already so was it the work of the Banshee or did the illness take its course? But either way, Barry is fully convinced the Banshee is real and that they need to be extremely careful with what they’re doing. Honestly, I’m a little surprised he decided to come along since it very well could be tempting fate for him.

The house itself is a wreck. The floors are rotting away, trees and bushes are growing inside, the stairs are broken and there is debris everywhere. In some places the floor is actually missing as Josh and Ryder find out as they almost walked off the ledge. They resort to spelunking down the wall to reach the lower level.

There are quite a few interesting events during the night not the least of which was the Syfy.com site being overwhelmed with visitors and being completely unresponsive for a large portion of the event. But, there are tons of birds and wildlife scratching around out there. There is even a bird that crashes into the ground while they are looking around. While none of these actually sounded like the Banshee there is no denying there are tons of sounds that could be mistaken for it and just add to the overall ominous feel of the place.

Rex sees a large shadow moving around while in the walled garden and swears it was a figure moving around. Others in the group think it could just be shadows from the flashlight but he’s convinced he saw something.

There seems to be a lot of activity in the towers where Josh and Ryder keep thinking they see someone or something up there. Even people at home hit the Banshee button saying they see something. Josh, Ryder and Kris head up the tower to see if they can find out what’s going on, but ultimately send Jael up to the very top so she can investigate alone. This is after she’s had a bought of dizziness and perhaps even a little nausea while investigating in the garden. She has to sit down for several minutes and Rex is by her side trying to get her to breathe and settle herself down. It doesn’t look like she got injured but definitely needs to take a breather before moving on.

She looks absolutely shaken and out of sorts and she climbs to the top. It’s hard to say if she’s still suffering from a bit of sickness or if she is just really scared, but her voice is trembling, she is having a hard time walking around and seems unsteady. She claims to hear footsteps and lots of noises when she’s up there. There is nothing tangible to be found and Jael is more than happy to come down out of the tower.

Even though I don’t think they caught very much this was a great event. I only wish Allison would have participated a little more. She basically spent her time watching the monitors and didn’t actually go out and survey the area. Also, several of the old gang were missing like Bicha, Mike and Evan. But overall this was a heck of a lot of fun. Josh was a great host and things flowed together quite nicely. A few audio glitches with the two sets of teams overlapping from time to time, but there was plenty of adventure to be had.

While they didn’t actually find the Banshee they certainly found out why so many people are afraid of the grounds. Not only is it dangerous, but the dense forest, the slew of animals and a myriad of bizarre noises would all solidify that the place is something to be avoided. And as was mentioned during the investigation if you did get frightened and started to run you could fall through the floor, run into a room where there is no floor, trip and fall down the crumbled stairs, get lost in the maze of plants and debris and crash into a wall or any number of other ways to injure yourself or even be killed. The Grove has a true element of danger surrounding it.

I’m excited Josh is back with an all new season and look forward to where he’s going to take us. I think Antarctica is the one I’m looking forward to the most, but from the snippets I’ve seen it looks like the whole season is going to be an awesome adventure.