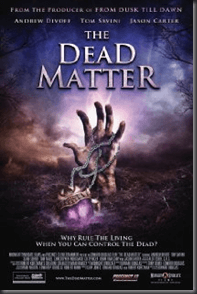 Holy Mother of Crap that was awful!! The first five minutes should have been a clue, but I struggled to stay on until the end and look what it go me. Some times independent movies are a real gem. Some time not. Sadly, the only good thing about The Dead Matter is the soundtrack. Only “The Rage” tops Dead Matter as a craptacular movie.

This movie is plagued by the trifecta or horrific acting, completely limp plot and shockingly juvenile special effects. Some of the makeup effects weren’t too bad, if this were a remake of the Michael Jackson, Thriller video.

The plot is simple, there is an evil amulet in the form of a scarab that can control the dead. On a completely separate note there is a new synthetic form of blood for vampires. Or is it a diet drug? Or is it liquid crack rock? How the two go together is still a mystery to me. And I’m not watching it again to try and find out. But moving on. Somehow a woman who’s lost her brother will use it to try and raise his rotting corpse. But not until she’s done hanging out with the currently rotting corpse she managed to conjure during a seance out in the woods at the Cairn stones. They will go and see the sites, go to the bar for a beer and head out for ice cream. It’s such a tangled mess.

There really is no point to this movie. There story makes no sense. There is no reason to follow along with these people, and the voice of the female lead sounds like a 5 year old on helium. Was it dubbed in? Truly, there is nothing good about this movie except the soundtrack. Midnight Syndicate makes a beautiful soundtrack and they should stick with that. Produce some movies to go with the score, but for the love of god, hire some real actors. Where the hell did you find these people? This is proof that you shouldn’t have your friends and neighbors star in your movies. Seriously, what the hell is up with that blonde wig? That should have been the first clue something is wrong with this movie.

A movie this bad makes Grave Encounters 2 look like an Academy Award winner.