Ghost Mine – Passageway to the Unknown – S02E10 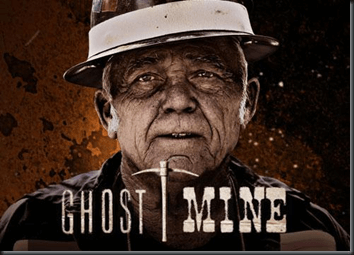 As we pick back up with the team we move forward with finding out what’s the behind the wooden bulkhead someone put up. The guys seem to be on the right path for gold since obviously someone else was here before them. It doesn’t take long for Dingus to knock down the barrier only to find the wall dead ends mere feet in front of them. Why block off the area if it’s already blocked off and doesn’t lead anywhere? Seems a pointless exercise.

Meanwhile Kristen and Stan are still in Arizona scouting the next location for Season 3 of Ghost Mine. The Octave mine has had two crews come in and both of them have left after seeing shadows and hearing noises and knocking sounds. Many of the stories seem similar to those of the Crescent. That seems pretty typical for these paranormal stories. What you hear in one place you hear in another with only slight changes to the details. I compare it to everyone having a "Resurrection Mary" story.

Kristen learns of some notorious figures from the area, specifically Charlie "Bloody" Stanton, an outlaw who terrorized the town. It seems he was trying to take over the town through various means. The Weaver Cemetery, a mile down the road, has the remains of Charlie and many other outlaws. Kristen heads down there to gather evidence. While taking an EVP she hears some unusual noises that turn out to be a fallen cross she had replaced on a grave.

Things get a little more interesting as she and Stan head into the mine itself to gather some evidence. Stan is totally on board with the investigation and even begins to talk out loud to any spirits that might be listening. They hear rocks falling on multiple occasions and even Stan admits to hearing some sort of breath while down there. They also get a few spikes on the Mel Meter as they move around.

As they head down one of the side tunnels, both Stan and Kristen believe they see something moving in the shadows. Stan says he saw something moving really fast. It certainly could have been an animal, but neither of them are sure what they saw.

Back the Crescent, Patrick tries a new experiment. He actually records the sound of the quartz with a microphone. When he plays it back, it sort of has the sound of heartbeat. At least that’s what Bucket says since I didn’t hear anything. Patrick interprets this as the mountain is charged with energy because of all the quartz. What that means in the long run is hard to say. Does that mean it’s dangerous? It’s hard to say. Quartz does hold energy. It can vibrate. Does that mean it holds the energy, negative or otherwise of lost miners? It might make the hauntings more intense. It might have an impact on the way people feel in that space. It might be increasing the level of paranormal activity.

But regardless of what it does, Eddie is going to be stopped in his quest for gold. The crew sets off another series of blasts in this newly found area and seems to punch their way right to the surface. It obviously edited to be dramatic, but it appears sunlight is streaming through the hole they just blasted and their new tunnel has lead them back to the surface. It doesn’t look like they found the rich vein of gold they were hoping for. They may have just run out of options for this mine.

Unlike the previous episode, there wasn’t as much physical evidence to be had. The sound of rocks falling, odd noises in a mind and perhaps even something moving can all easily be explained. But the odd part is the human element. Why did someone wall up a dead end tunnel? In retrospect perhaps the other miners knew they were heading up to the surface and put the wall in place to stop other people from making the same mistake. It looks like this team is running into some bad luck, not only with their equipment, but with their decision making paradigm.