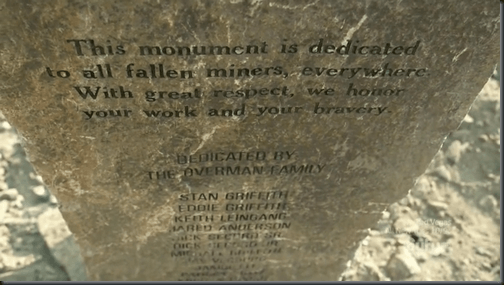 So here we are at the final episode of the season and there is still plenty of action before we say goodbye.

When we last left the team, Patrick and Kristen were sifting through the debris of the original bulkhead for the mine to determine if there were any Masonic symbols. Sure enough, they find a board fragment with some pretty clear signs. So it appears the Masons closed off all the entrances to the mine. Whether this was done to keep people out or something in remain to be seen. But it’s pretty clear this mine had a Masonic influence.

Meanwhile back in the mine, Jay swears he sees a shadow figure walking around and by the way Dingus is talking, he may have seen something as well. But the big surprise is not just another bulkhead blocking their path, but one made of stone that completely seals off the tunnel. Very Cask of Amontillado.

Eddie wastes no time in trying to get a peek at what’s on the other side and chips away at the seal. He makes a small breach and is met with a rush of rancid air. As he describes it, it smelled like something died. He’s then met with a burning sensation all down his side. So much so, he rips off jacket and gloves to check it out. Low and behold there is a large rash running down his side. If you look at the still shot, it’s possible it’s the imprint of a hand and thumb. Eddie, normally the one to dismiss everything, has no explanation for this one.

Kristen and Patrick come back later to investigate the same spot with K2 meter flashing wildly and record what sounds like some sort of caged beast on the other side of the wall. It was certainly made to be dramatic, but I highly doubt there is some sort of demon on the other side and the only thing saving us from it are a few rocks cemented in place.

Nevertheless, the odd happenings are starting to make the miners wonder. In an moment with their defenses down, each one of them all but admits to hearing phantom miners in the tunnels. Jay and Jamol show clear signs of concern about what might be in there and Graybeard is a little concerned too. And their fears are tested as Patrick and Kristen bring more evidence to them including the odd growls they heard. The flatly state they don’t think the mine is safe and not to proceed any further.

Stan puts it to a vote with Jamol, Jay and Duck all wanting to leave well enough alone, but Eddie and the rest want to push forward and see if the payday is right behind that wall.

A distressed Patrick and Kristen follow Eddie, Stan and Bucket into the mine to check out the wall to form an approach of breaching it. But as they do, things go horribly wrong. Stan is the first to call for a retreat as the mine rumbles with the sound of something sinister. Then it’s an all out sprint to abandon the mine as it all begins to cave in. It’s an honest to God cave in and the 5 of them are literally scrambling for their lives.

With the other miners standing around, they barrel out into the open air as the dirt and trees fall in on themselves smothering all the equipment still left inside. They made it out within an inch of their lives.

And that is the end of that. The mine is collapsed, machinery is destroyed and there is no way they can get back into the mine to search for any more gold. The season is over whether they like it or not.

It looks like this mine is going to be abandoned. It’s clearly not stable and would take far too much work to find a vein worthy of a payoff. But as the team packs up and gets ready to go home, they make one final gesture, something that perhaps they should have done at the start of the season. Since they nearly lost their lives they erect a stone monument as a tribute to all miners that have been lost.

"This monument is dedicated to all fallen miners, everywhere. With great respect, we honor your work and your bravery."