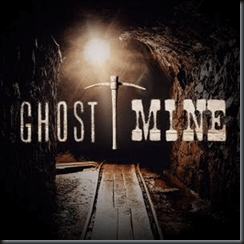 When we last left the Crescent mine the team had just lit the fuse to some major explosives that may have cleared more than they bargained for. Turns out they blasted out the backside of the mine and they see plenty of daylight. Turns out the bulkhead they smashed through was actually the entrance to the tunnel and they’ve been going the wrong way. Instead of going deeper into the mine they pushed completely out. Looks like they have to reverse direction if they want to find more gold.

They believe there’s another entrance below them so Patrick volunteers to repel down and check it out. In what was edited together to be tense moments of lost audio and video along with Patrick’s rope acting like he came off of it, we see Patrick perfectly fine in the entrance of the other tunnel. But it turns out this too has been sealed off and caved in. But like the tunnel above, this is an entrance, not an exit. No point in blasting it since they’re still in the wrong place.

Since Kristen has been gone so long, she and Patrick go over the mine to check out any new activity. Turns out the raise platform has multiple spikes going on as they do some EVP work. It gives a particular shake when Kristen asks if there’s gold in the tunnels. Patrick also says he feels a rush of wind at the same time. Let’s keep in mind that there is now a giant hole to the outside and they’re only a few yards away from it. Not to mention standing on a platform resting on blasted and loose rock.

There is additional activity as both miners and investigators head deeper into the mine heading in opposite direction as before. As they get to the new cave-in they all hear the sound of mining equipment being used and someone working. There is the ting of hammers and the sound of rocks falling. Are they picking up sounds from another shaft or spiritual energy? Even Eddie hears it and finds it odd.

Additional viewing of the footage shows what they feel is a shadow figure behind the debris. There is also the sound of what they think is a voice and one that isn’t speaking English. According to their translation it might be speaking the word "demon".

Undaunted, the miners dig in deep and work to clear out the obstruction in the tunnel. Dingus and Jay are given the job, but as they work Jay experiences a couple of different things. He feels a tap on the shoulders and is quite certain he sees someone or something down in the tunnel with them. Jay seems pretty convinced they aren’t alone.

And finally, Kristen and Patrick as about the main entrance to the mine. Did it too have a bulkhead like the others? It wasn’t quite the same, but the timbers are off to the side so they sift through them. Low and behold they discover something, but what it is will have to wait until next week. More than likely we have another symbol from the Masons. No real surprise there. It’s still coming across as though there was a rich ore deposit just out of reach so the mine was boarded up until they could come back for it.