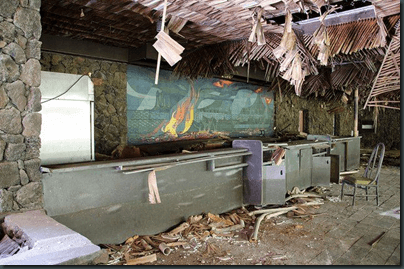 For this investigation, the team heads to Hawaii to investigate the Coco Palms Resort, a dilapidated hotel that is literally being consumed by the jungle. It used to a hot spot resort, but became plagued with problems. It is said to be built on sacred land where tribal battles took place. A mysterious set of protectors known as the Night Marchers are said to rise from the ground and kill anyone who looks at them. Other claims include shadow figures and the feeling of being choked.

While the hotel is a shambles now, it is said this skeleton will be swept away and a new building will take its place. The verdict is still out on whether that is a welcome change or not and if those stories are stirring up the activity.

As they start their baseline sweep they get the words, "stab" and "murder". It’s claimed human sacrifices took place where the resort now stands. One thing to note – the story changed from there were human/blood sacrifices, to there are rumors of it happening. I’ve noticed that’s happened a lot with this show. As they start, these events are presented as facts, but once we get moving a little bit, it switches over to being a rumor.

While investigating what is being called the chapel, it’s actually a wedding chapel, Porter sees something moving around out in the night. Now, let’s be clear. They are in the jungle, with trees growing right through the building they’re standing in. They are in thick growth and its night. Are we really to be shocked that something is moving around? I’m sure it can come across as unsettling, but how can you possibly say its anything other than animals looking for food? Or even birds swooping to the ground?

For Day 2, it’s time to bring out the experiment of the week. This time we have the 360 Para-Cam, a helmet with cameras that can see in 360 degrees so they can capture the Night Marchers without actually looking at them and losing their lives. In order to stir up the activity, they get some locals to perform a warrior ceremony. This seems to create all sorts of noises in the jungle.

As they head back to the chapel, Doogie starts choking as though the Choking Ghost has gotten a hold of him. It wouldn’t be a bug, this is the work of the ghost. At this same time, there are a slew of dogs barking. They take this to mean someone is out there and dogs are sensitive to the energy. This may be true, but it also proves there are animals close by. There is nothing to say what they saw or heard before wasn’t just a dog running through the jungle. They’re clearly stating other things are out there in the night, but discounting them at the same time.

Also during their investigation, they feel they hear drums, a sign of the Night Marchers and capture what they think are torches. They also talk with a couple of locals who blend in more rumor and superstition. About the only thing tangible are the stones with carvings on them. They claim it’s part of the sacred burial ground, but if it’s so sacred, why is it in such a shambles? Why isn’t anyone taking care of it? Why is everything just tossed to the side. You can see carvings in the rocks, but their exact nature doesn’t feel too defined.

What we have at the end of this is a run down hotel and a whole lot of superstition. Blaming fires and hurricanes on angry spirits? Choking spirits? Who the devil knows what kind of spores or bugs you could inhale out there? Night Marchers? What part of that doesn’t sound like a complete legend?

The place is a wreck. Maybe it is on a burial site, but if so, no one seems to be putting in an effort to make the place a memorial. Right now, it’s a broken down series of buildings, with a thick dense jungle around and lots of wild stories. All the stories of this place are urban legend and superstition.