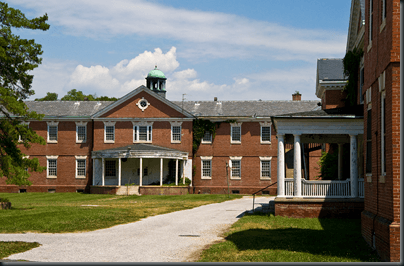 For this episode Chad and John head to Sykesville, Maryland to visit Springfield State Hospital. It is yet another tragic tale of a facility set up to treat mental illness that ends up with overcrowding and stories of patients locked up for hours and perhaps days on end. The conditions reached a breaking point and the hospital was ultimately shut down. Now there are tales of spirit energy and patients that still roam the halls. Work crews hears hear moaning, while other feel a presence. The building has been abandoned for years so there are plenty of stories circulating around.

As they speak to Ivy, who knows an awful lot about a building she’s never been inside of, they hear stories of abuse and isolation and that some patients were left down in the steam tunnels below the building. As Chad and John look over the place, Chad is once again inflicted with pain from some unseen force. This happened in the first episode as well and they feel the encounter has left a scratch. They also take a quick peek down in the steam and tunnels and I’ll be damned if it doesn’t look like they built rooms down there. What the hell went on in this place? Did they seriously stick patients with mental disorders in tiny little rooms with dirt floor where they probably couldn’t even stand up?

There property also has it’s own cemetery, but sadly, the patients were simply buried. There are no markers to list their names. The best they got were numbers. That’s no way to be remembered.

John goes first on his solo investigation and hears knocks and what he thinks are moans. As I’ve said so many times, this is an old, rotting building, there are going to be bangs as the place settles over night. There could easily be moans as pipes expand and contract or doors creak on their hinges or birds settle for the night. It’s best to look for the simplest answer, not try to bend sounds to be the paranormal.

Chad is up next and right from the start he is out of his mind with fright. Every sound makes him jump out of his skin. Like before he near the point of hysterics as the walks around the building. This goes far beyond just being nervous, this almost the point of panic. In this state, every noise is going to sound like the devil reaching out to get you. You’re clearly going to see and hear things in the worst possible way. This really isn’t a good way to approach investigating the paranormal. And compared to John’s rather cool demeanor as he walks around the complex, it makes Chad seem ever more hysterical.

When it comes to evidence there are some odd sounds, but who knows if those are voices. The camera goes out in Ward W for both Chad and John. They interpret this as spirits building up energy to manifest. And that manifestation comes in the form of some black mass moving in front of one of the laser lights they have set up. People are doing some wacky things with Kinect devices. Who knows what we have here. I suppose you could say there is a figure moving between the dots, but to me it’s not really all that compelling. To be honest, there has been so much trickery and Tom foolery associated with these shows, that could just as easily be one of their crew wandering around. I’m gonna a bit more than a blocked out dot.

So the question remains, does asylum with it’s checkered past and abused constitute a location holding a portal where spirit energy can pass from one world to the next? I didn’t think this place was all that active. Oh, yes, it’s creepy as can be, but just because it looks the part doesn’t mean it’s haunted. I wonder how much Ivy and the start of Maryland are selling this place for? They’re brick buildings so it seems like you could do something with them. Fix it up and it would be a sweet haunted attraction. Oh wait, can’t do that. All that negative energy would make it haunted. Just ask Zak.