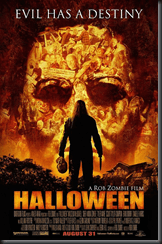 Since the original Halloween movies left a little something to be desired I decided to check out Rob Zombie’s take on these two original slasher movies. I have to say his first movie added a massive amount of backstory that to me gives a lot more depth to the original movies. However, his second retelling didn’t exactly thrill me and halfway through I found myself giving up and looking for something else to do.

This remakes give us a glimpse of Michael Meyers that’s been abused both emotionally and physically for years and he can only communicate and tolerate the world when he hides behind a mask. All the bullying he’s suffered as a boy comes out as he gets revenge on several boys. Those acts send him to an asylum where Dr. Loomis is brought in to try and help. This is why Loomis has an interest in finding Michael in the original movie.

I found the first movie pretty intriguing and when relating back it the first, both movies make a lot more sense. Michael is the victim and he’s lashing out. At least we understand who Michael is and that he’s a disturbed man who had a terrible childhood and horrible events in his life.

Unfortunately, the follow up doesn’t hold up as well as the first. Like the original it picks up where the first left off, but the movie plods along so poorly that I quickly started to lose interest. Unlike the Zombie’s first effort this doesn’t add any real depth or explanation to Michael and quickly devolves in violence and gore for the sake of showing it on the screen. Before Michael actually makes his epic trek back to Haddonfield I was bored silly. Just like the original I got bored pretty quickly and just didn’t care. I ended calling it quits with the intent I would come back later. I still haven’t finished it.