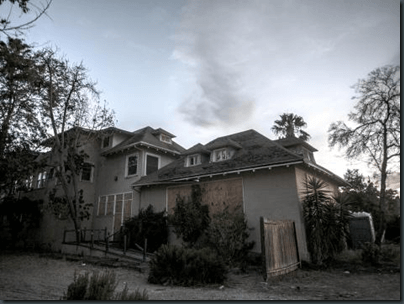 For this episode, Zak and team are visiting Casa de Rosas which has been used as a school, housed soldiers during war time and for a short period was the compound for Dianetics author and founder of Scientology, L. Ron Hubbard. It was built in 1893 and has now fallen into complete disrepair. The building is a wreck with broken walls, graffiti, vandalism and who knows how many animals now call the place home. But those who have paid the location a visit claim to feel dark energy, see figures, have a sense of dread, feel that the walls are closing in and feelings of claustrophobia. What started off as an experimental kindergarten has basically turned to rubble. It’s even said that a woman was found dead on the third floor.

The main hook for the location is the link to L. Ron Hubbard, who worked at the compound during the 1950s. To that end, Zak interviews Jeffrey Augustine, a former member of Scientology who has some revealing stories to tell. He claims that Hubbard was a Satanist and one of his main goals was to bring the Antichrist into the world. He accuses him of locking people into small rooms and emotionally abusing them with the intent of bending them to his will. He also claims that Hubbard borrowed many of his teachings from Aleister Crowley and Themela.

The investigation starts with the SB7 box. Aaron gets what he believes is a female voice at the same time that Billy feels cold spots above the bed. This could be the same location where Essie died. Zak also believes he sees an orb moving around the room. The activity seems to hit a frenzy and a mysterious doll appears out of nowhere which Aaron feels was thrown at him.

In another part of the house, Jay puts aside the handheld camera and instead puts on a GoPro camera around his neck with UV lights to pick up images. This serves to make it impossible for Jay to actually see where he’s going, so he will need to feel his way around in the dark. I’m not quite sure I understand the purpose of this method. I like the idea of the camera around the chest, but why put one of the guys in total darkness?

During their investigation they hear a lot of banging, a lot of knocks, the sound of what might be doors closing and when all is said and done, Jay walks out of the house with a large scratch along his neck. While it’s not that likely, the red streak points toward a tattoo with a pentagram in it.

While the idea that L. Ron Hubbard hung out at Casa de Rosas, when all is said and done they really don’t capture any evidence I would say is compelling. Regardless of how dramatic Zak is with his comments on dark energy and Hubbard practicing Satanism and trying to conjure up the Antichrist, let’s look at a couple of things. What did they really capture? An orb? Hmm, that’s usually headlights from cars out on the road. The voices? Garbled noise and could be anything. Having Jay wander around in total darkness? All that does is cause sensory deprivation and who knows what he is going to experience. That is hardly reliable and far from a scientific method of inquiry. And the red mark on his neck? You lock the guy in the dark and he has to fumble around. He ends up with a scratch on his neck? How shocking! How could such a thing ever happen? No one crawling around an abandoned building in the dark has ever scratched themselves before, this must be the work of the paranormal!

Let’s also not forget that right at the beginning, Zak not only says and shows the place is riddled with dead animals, what abandoned building isn’t going to be home for all sorts of vermin and small animals? I’m sure they have nothing to do with the noises they hear. It’s certainly not going to be boards creaking an expanding through heat or simply crumbling to the ground.

Another thing that was interesting is how the term "fun house effect" was thrown out. If you get a building that’s starting to sink, has crooked walls, cramped spaces, odd angles and strange slopes to the doors, you’re going to feel out of sorts. This has nothing to do with the paranormal and is something you can experience during the day. How interesting they bring up the idea themselves then completely ignore it.

Finally, before Zak even steps foot in the place, he has already convinced himself the place has dark energy, is the home of the demonic and buys into the idea that Hubbard was practicing Satanism. He doesn’t need any proof and because of his preconceived notion, everything he sees and hears supports his ideas. That’s the same as making the data and the experiment support your hypothesis before you even start. It might make for good television, but that doesn’t mean it isn’t bunk.