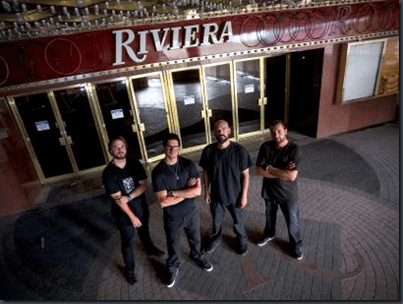 It took me a few minutes to understand why this was a "return" to the Riviera until I noted they visited in Season 6. For that episode they were trying to make contact with Frank Sinatra. If you recall, they were with Vince Neil and Frank Sinatra’s personal pianist. But times have changed and the hotel is quite literally ready to collapse, whether it wants to or not.

It’s scheduled for demolition and has been gutted of everything of value. It’s nothing but a rubbish filled skeleton and from what Zak says, this is the last investigation inside the hotel.

On their previous visit, they were focused on mob connections to the hotel. For this episode they’re all but obsessed with the dark energy surrounding people who come to Vegas to commit suicide. There is the story of a woman who just months ago leapt to her death from one of the rooms. She met with a very gruesome end which they have no hesitation in showing. On the cement is the sand put out to soak up and cover the incident. Then we have these over dramatized scenes that all but make this suicide attempt look sensual.

Moving past that, Zak has the idea of asking strangers of the street to come and join in the investigation. They are put on different floors and given the chance to walk around and experience the energy. There are some bumps, the sound of what might be a door closing, Victoria feels something walk past her and perhaps a man’s voice. All the guest investigators feel something is lingering in the hotel.

Then Zak and team move in, but they have their own little guest which is Sophie. This is Billy’s dog who roams around the hotel with a camera attached. An interesting idea to be sure, and she end up getting anxious and growling at the same time Billy says he feels some sort of static energy. Aaron and Billy bring out the Ovilus and get the words, "observe", "saw" and Veronica".

In a different part of the hotel, Zak enters the room where the woman jumped. He feels a strong energy coming from it. But before they can get inside, the door mysteriously locks them out. It also mysteriously unlocks itself a few minutes later. They take note that the window is still wide open.

Inside, they pick up the words, "I jumped" and "you feel me". On the exterior camera there appears to be something dark in the vicinity of where this woman took her life.

Down on the casino floor, Zak feels cold spots and believes he captures a figure walking.

Like the previous investigation it really doesn’t feel like they capture much. Clearly the windows are open so a door closing wouldn’t be all that shocking. Not to mention the utter disarray of the place. Noises from the ceiling falling or animals running around would be common. A door getting stuck from expanding wouldn’t be that surprising. Zak and Billy can feel all the strong energy and static sensations they want, that doesn’t seal the deal of paranormal activity. And after getting their guests all hyped up and repeatedly using the word "isolation", I have no doubt they were all worked up and after bumbling around in the dark crashing into walls, who knows what they were feeling.

There is no doubt that Vegas has seen some dark times, from a mob perspective as well as people hitting rock bottom as they gamble more than they can cover. You can’t deny people have taken their lives in those rooms, but is it seething with energy as Zak tries to make it out? Doesn’t feel like it. It’s a hotel that seen both good and bad times. Their evidence is really open to interpretation. It’s interesting just like it was the first time around, but like that time, it’s a tepid investigation.

2 Responses to Ghost Adventures – Return to the Riviera – S12E04