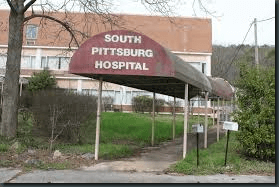 Our next outing for Ghost Asylum takes us to the Old South Pittsburg Hospital with it’s odd tales, scary doctors and perhaps, even scarier residents. The hospital was opened in 1959 with claims of doctors performing questionable experiments on patients, cruel treatment, large shadow figures and perhaps the spirit of the drug addict that took up residence and died in the hospital itself.

As they talk to local residents, they all believe the location is haunted and some think it should just be torn down. One even has a story about an investigator who had internal bleeding after investigating the hospital. I wonder if the she looked at Peggy the Doll before setting out on the investigation?

With the investigation underway, there is a long drawn out "scared" on the recorder, but oddly, it doesn’t seem to line up with the conversation. The team then turns to the flashlight trick again and get blips on the K2 meter.

For the hospital nursery, they bring in "Boo Bear" which is a toy that talks and records environmental readings. Although the nursery doesn’t appear to be a hotbed of activity.

Like their previous episode, they decide to a little reenactment. Brannon feigns a drug overdose and asks for the doctor’s help in saving him. They run around in the dark, yelling and carrying on as though this is supposed to stir up activity. It makes them look pretty damn silly if you ask me. However, they feel they capture a shadow figure and get someone saying, "Quiet" to all their noise.

On night 2, they bring out the Shadow Seeker, a metal tube filled with holes hooked to a propane tank. This is supposed to be some dazzling light and pyrotechnics display to bring out John, the addict from the first floor. How it works the mojo is unclear, but its fire in an enclosed space, so let’s run with it.

They hear lots of banging and feel there is a large shadow lurking around the corners. They hear growls and try to track them down to maintenance closets. On the recorders they feel, "You found me" is captured as they open the door. "I don’t listen to these songs" is also captured while playing the music.

For the most part, what they capture is a lot of bangs and knocks. All right, fair enough, creepy business. But let’s have a quick look around the place. That, "residence," is loaded with junk that vermin would just love and they make the horrible mistake of opening the refrigerator. Although it’s rancid, it proves things were left behind and these would be an enticement to all sorts of animals. Knocks, bangs and scratches would easily be attributed to them. And no, you wouldn’t see them in a maintenance closet or in the dark.

So, are we completely sure there are no animals living in there? Are we just as sure that someone hasn’t taken up to living in the hospital again? It’s easy to say no one would live there, but if it’s the choice between the cold streets and a roof over the head, I’m pretty sure even a creepy place with plenty of places to remain unseen is better than the gutter.

I don’t know if the Shadow Seeker did anything except look neat at the end of the hall. They did capture some voices and there is the pulling on the Chris’ necklace. Hard to say what we have there. Clearly the necklace could be tugging on something else, and the audio has to be enhanced quite a bit. Are those really other worldly voices or voices from another source such as someone talking outside, their own voices being misunderstood, other people messing around in the hospital at the same time, radio station residue, picking up a walkie talkie, etc. The locals visit the place, there is nothing to say they weren’t close enough to be heard, especially when they know an investigation is going on.

As a side note, if you look up the hospital, many people make a Native American connection and make comment about the water source that runs under the property. Like so many other stories, the Native Americans had trouble after being generous with their land and the running water is supposed to increase the energy.

Both are interesting ideas, and we’ve certainly heard them before, but nothing experienced or captured over these two nights was definitive.