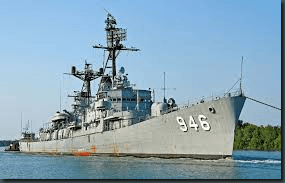 Imagine my surprise to find out there was a new episode of Ghost Asylum, let alone an entire season had gone by and I missed it. We’ll have circle back around and check those out, but let’s press on with the season opener.

When we last saw the Ghost Asylum gang, they were hard at work building devices to contain spirit energy so it could be measured and studied. They still continue that quest and this time we’re on the USS Edson, a battleship deployed on 6 missions during the Vietnam war.

Some of the activity includes shadows, disembodied voices, tools moving and plenty of knocking sounds. Besides the usual casualties and chaos that would be associated with a real battleship during a time of war, there are two strange deaths. Paul, a caretaker for the ship, died of a heart attack while a sailor locked himself in a hold and suffocated to death.

As the team does a baseline sweep, they note high EMF reading from all the electricity still pumping through the ship. That alone would explain plenty of feelings people have about this place. Instead of acknowledging it as a primary cause, they simply ignore it and say they need to rely on their other senses. It’s always best to toss out a logical explanation or at least one that is tangible and stick with the paranormal angle.

Things start off in the infirmary where it’s claimed the surgical tools move. In the war room, they feel something walk between them. There are lots of knocks and tapping sounds as well as the spider web feeling across the face.

Another location Chris checks out, is the hold where the man committed suicide. While he says there is a presence, there is no evidence of any activity. That is, until the last second where he asks if the entity wants him to leave and the proximity meter goes off.

In the mess hall, we see the old flashlight trick. As they ask if the sailors don’t want to interact with regular civilians, the light mysteriously flickers. But in order to get in their good graces, they stage a fire drill. This leads to knocks and taps which they take as positive responses. They also believe they capture the answer, "not that long", when asked how long it took to die in the hold and there is a shadow figure in the video.

For Day 2, they bring out of the Cryogenic Cloak, which is a sweet name for mixing dry ice and water on a rack to produce fog. It’s their goal to use this fog, along with both digital and analog photography and recordings to capture a spirit.

They work with more trigger objects including firing the ships gun. From there, its time drive the entities down to the ice machine. What they feel they capture is a picture of Paul. The other evidence includes a voice captured on the analog tape.

Putting the high EMF readings aside, we have bangs and pops from a gigantic metal ship sitting in the water at night. That really doesn’t sound like paranormal activity. The flashlight gag just need to be discounted immediately. And capturing images in swirling fog seems a little ridiculous as well.

The USS Edson has seen plenty of action, that’s for sure, and perhaps there is more to the story, but pops and clanks from a giant metal container and odd feelings are not evidence of the paranormal.