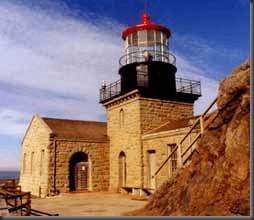 I like investigations involving lighthouses. There is something lonely, mysterious, peaceful and haunting about them. That loneliness can lead to desperation. The sea can turn ugly and take lives. We have lots of stories about shipwrecks and figures still guarding the light. Does Point Sur still have a mad on watch?

The guys meet up with Julie Nunes, a tour guide for Point Sur, who claims to have dozens of EVPs from her own investigations. But these don’t sound like you’re average comments, it sounds like these spirits might be in the throws of passion and may be on the verge of getting caught. There could be comments such as, "you liar, you kissed her", "take off your shirt", "don’t grab me, he’s right here".

Julie reveals that there was indeed more than one family living in the lighthouse and that there was a supposed love affair going on. The details are pretty vague, but if there was indeed more than one couple or even just multiple people out there in the seclusion of the see, passion and jilted lovers would certainly be possible. Is there some dark energy out there because of love gone wrong and infidelity?

Besides these somewhat salacious EVPs, the other activity includes boards dropping in front of people (which doesn’t seem all that surprising since the roof is coming apart) and a girl singing. It doesn’t seem like anything nefarious or treacherous is going on out there though. Not the usual "dark energy" Zak seems to go after.

But during the investigation they do hear what sounds like a girl singing. They aren’t able to find the source, but it’s not an EVP as everyone on the crew heard it. Additionally, they capture what seems to be a figure walking along the coastline. It’s later revealed that may not be the coastline at all, but perhaps the old tracks used for delivering supplies.

Unfortunately, they don’t capture any more of the love affair. Rather they get what might be a girl crying and the words, "Michael" and "Admiral". Were the lighthouse keepers in their time? Are they attached to the place? And was that indeed a little girl crying?

I think the most compelling piece was the figure walking. Is that really a ghostly figure? Could it have just been one of the local residents? Was it perhaps just an animal walking along that path? Unfortunately, the guys didn’t go down to the spot or at least photograph it from a distance. Is there no way for it to be an animal or person? A tiny bit of debunking would have gone a long way on that one. I’d really like to know what the hell that was.

So is Point Sur haunted? Does it hold some restless and amorous spirits? Is there more to this story? Was there a love triangle going there? Did it lead to something more sinister? Or are these voices being captured from elsewhere? Is the wind picking up conversations from somewhere else? Are these phone conversations or radio communications? It’s intriguing stuff that’s for sure. If there are spirits at the lighthouse, they seem to be having a pretty good time.