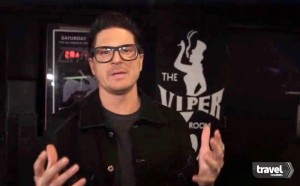 The next Ghost Adventures investigation takes us to the Sunset Strip in West Hollywood, California into The Viper Room, where River Phoenix died of a drug overdose on Halloween. It is also said to have connections to mobsters such as Bugsy Siegel. Additionally, one of the owners, Anthony Fox, went missing one day and only his truck was found in the desert.

As Zak talks with Maci, manager of the Viper Room, he draws the conclusion that Anthony was dealt with in a mob fashion. Maci says she was told a body is buried in the crawlspace of the club. Maci also says she has received phone calls where it’s nothing but a voice saying, “hi, it’s me.” Zak believes this to be an ethereal spirit trying to reach out.

He then meets with Rita who says she has a spirit that makes contact with her through her phone. She is receiving text messages from the beyond. Zak ties these to the calls Maci has received. While talking to Rita, she says something is around her and Zak records her hands as being cold. Again, cold hands are indicative of poor circulation, not the paranormal.

Tommy Black, the manager, says that several people who stand at a certain place at the bar tend to fall over. He then shows video of a couple people toppling over. Zak suggests this is due to paranormal energy and not due to inebriation, sloped floor, or some other physical attribute to the floor.

While they didn’t get any voices while talking to Rita, when they investigate “The Hole”, they receive some voices and let Rita listen in. While they sound like nothing more than static or even a void in the recording, Rita claims it’s River Phoenix saying, “I’m confused.” This is a clear case of wishful thinking and playing it up for the camera.

For the investigation, they hear several bangs along the bar and believe it’s the door to the secret room. Billy claims he sees a hand behind the door beckoning them to come in. Aaron suits up and heads into the crawlspace where there is a tangle of wires and duct work.

There is so much activity at the location that they can spend time documenting how many times Aaron complains about being in the crawlspace.

Back upstairs, Billy sets up an ITC experiment, which Zak says generates a face out of the swirling mass. When nothing further happens, he plays guitar on stage and invites River to play along. They turn on the Paranormal Puck and ask some questions.

They believe they contact Anthony Fox, but the communication ends when they try to ask who killed him and where his body is. But as that conversation ends, they get what they feel is a guitar note from the stage and that River Phoenix has joined them.

I don’t think there is too much to say on this one. The foolishness of saying they hear River Phoenix in the burp of static speaks for itself.