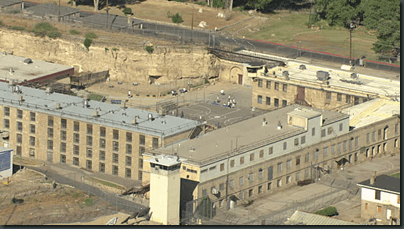 With the antics of Deadly Possessions out of the way, it’s time to pick up where we left off with Ghost Adventures. This time Zak sticks close to home to investigate the Nevada State Prison. As is usually the case, the prison has a history of violence and death. The prison opened in 1862 and brings with it, 54 executions, as well as the usual claims of hangings and suicide.

Zak checks with some former inmates and guards who relay tales of the crimes they’ve been witness to. One man was found hanged in the shower, one prisoner was supposedly burned to death and another was stuffed in "the hole" for years on end. We also see a picture of a shadow figure that looks like someone standing in a hallway.

Right off the bat, not only does Zak declare the prison haunted, but goes a step further and says demonic entities are calling it home. To that end, he meets with a prison guard that says a demonic entity called, "Dante" is calling him up on the phone. I hope I’m not the only one who finds that story more than dubious.

But he’s not the only guard experiencing odd behavior at home. Another guard claims unholy forces have followed him home. Zak and team kick off a mini-investigation in the house and get no EVP responses. Undaunted, they begin to "feel" a presence and act as though something is walking up behind them. And although they got nothing before, they now get the words, "bend over", and the word, "the devil". I am in no way surprised "the devil" showed up. Given the build up, it would be more surprising if it didn’t show up on the machinery.

As they get on with the prison investigation, they get the words, "attack" and "slain" on the Ovilus. Zak calls this a barrage of threats and claims to hear the words, "let me out". Zak also points out multiple light orbs which he is quite sure are paranormal evidence.

Another staple for Zak, is he feels anger and rage, which causes him to start yelling out that the spirits don’t have permission to use his body. It’s also at this point the SLS camera picks up an entity in front of him and the word "demon" pops up on the recorder. As they get ready to leave they get a final message of "hang yourself glance." An odd farewell to be sure.

Back at nerve center, they pick up noises of bangs and pops in the prison shower. When Billy goes to investigate he says it feels different and it’s hard to breathe. He tries to convince whatever is down there they’re free to leave. He’s going to open the door for them and they don’t have to stay in the shower anymore. On the Talking EVP, he gets the response, "Helpful", "Close" and "Brother". Billy takes this to mean that he is being helpful like a brother by opening the closed door.

For the final part, they head to the Mess Hall and bring out a new device, the Pilfer Device. It’s function is to create a field of ions that entities can use for energy. It looks to be a small variation of the Jacob’s Ladder. And as the device charges the air, not only does Jay feel the energy rising, which is pretty obvious, Zak tracks an orb moving around the room. Billy and Jay then let the prisoners know they’re in charge, to which they get the response of a door slamming.

It’s quite something that a demonic entity is calling a guard on the phone. And Dante was a poet, it’s not the name of something demonic. He wrote about the Devil, or at least his interpretation of the Devil and Hell, but an entity calling itself Dante is as far fetched as you can get.

This episode had multiple example of Zakisms we should now come to expect from his investigations.