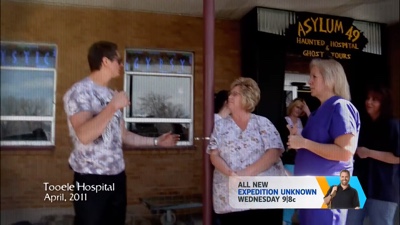 Zak heads back to Salt Late City, Utah to investigate a larger portion of Asylum 49 (aka Tooele Hospital), a haunted hospital and ghost tour location they visited in 2011. At the time, the nursing home portion was still in operation and they couldn’t film inside. That facility has been closed and was purchased by the owner’s of Asylum 49 to expand their haunted attraction. Is anyone else seeing a business/monetary angle to this investigation?

The hospital is supposed to have a dark figure that sneaks into patients rooms and expedites their death. There is also supposed to be a little girl, and when she appears, death follows. Further, the shadow shows up at 3am and patients die in threes – the plot to dozens of Hollywood movies and legends.

Zak talks with Marie, the nurse from 2011, and finds out she’s been fired for telling the truth. In reality, she was most likely let go because she said the patients were in danger by some dark entity. She basically opened up the parent company to a massive lawsuit.

Dakota, a former nurse, says he responded to a death call at 3am. This is the Devil’s Hour and can’t be a coincidence, according to Zak. Further, Dakota received three scratches on his arm and saw dark figures on the security cameras. These same security cameras were taped up by the staff because they didn’t want to see the dark entity on them. At least that’s the running story.

Kimm, the owner, takes them to a room where a patient died and on the bed in the outline of a body in powder. Not long after, Mike the audio engineer, says he felt something brush his ear and saw a shadow figure disappear. This is followed by what they claim is a little girl, the harbinger of death. Too bad no one else saw or heard these.

To start the investigation, Billy spends the night in the room where Kimm showed them the body. During the night he hears the much expected bangs and cracks, but gets the big surprise of a door closing. When he checks the room, the window appears to be open, but he won’t enter. Had someone been in the room helping the door to close, they would have remained hidden.

The next day on the same floor, we see some ridiculous garden gnome in the hallway, that clearly wasn’t there before. This will come into play a few minutes later when Aaron goes to check a camera, hears a struggle then panics. In his panic, he bolts into a room, says he sees a figure and stumbles down the hall. Turns out he was at the same door that shut while Billy was sleeping. Good thing the gnome was there so Aaron knew exactly which rooms to have his fit in front of.

Aaron continues on and thinks he hears a girl’s voice. He begins to panic again, and when Zak comes down the hall to try and help, he looks like a shadow figure which causes Aaron to crap his pants and hurt his back.

Billy brings out the new Spirit Sweep Device, which is something he worked on with Bill Chappell. Like the other cobbled together devices they use, this detects changes in the environment. As they go to place the device, Zak hears the voice of an old man. This is followed by two streaks of light.

As Billy repeatedly fiddles with a device he says he has no control of, they get the phrases, “please help me”, “thank you for that”, “I’m back home”.

Zak then brings out the SLS camera and the thermal imager. He once again proves how simple objects look quite sinister in the dark. What he thinks is an entity is merely Aaron’s reflection. While he “debunks” the situation, it proves the misinterpretation of data.

Finally, they head back to nerve center because Billy has a strange EVP. Zak asks, “do you want to talk to us?”, which is followed by a wheeze or death rattle. Zak says this is the old man he heard. However, play this segment a few times and you will see Zak breath in at the exact moment the wheeze starts. Notice the movement of his neck, lips, and throat. I’m quite certain Zak made that noise himself.

In short, this is an episode dedicated to raising the mystique and scare factor of the Asylum 49 Haunted House. Their evidence can be easily duplicated through earthly means. Billy doesn’t go into the room where the door slammed, which is suspicious. There is a marker so Aaron can pick the same room. The voices come through while Billy is touching all the knobs of his new device. And it appears Zak is making ghostly noises to help enhance his EVPs. Other than scaring themselves, they don’t capture anything.

Two letters come to mind. One is a B. The other is S.