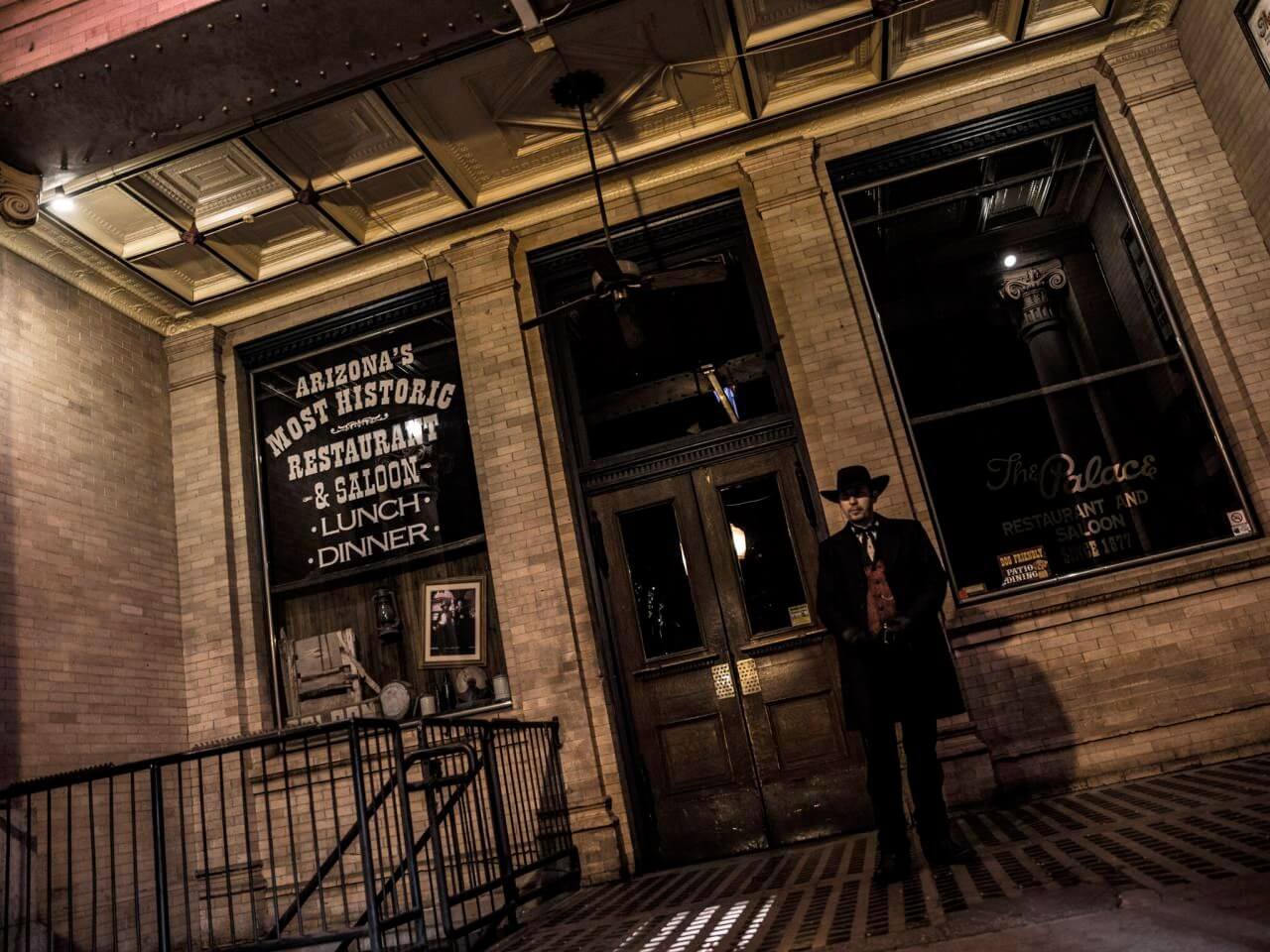 We’re off on another adventure in Arizona, this time to Prescott. Zak is no longer content with merely documenting evidence of the paranormal, he is now a self-proclaimed demon hunter. He’s been asked to visit the Palace Saloon, to help get rid of some extremely dark energy, the manifestation of which has presented itself in a falling mannequin and a falling plant. Pretty mild, but the employees claim the basement is bad. They also claim to have been pushed with one saying she was groped.

As they look at the history of this Wild West town, there are several news stories that record deaths at the saloon. We have the usual suicide, drunken brawl, and a story where a woman was trampled to death while a looked on.

In conjunction with the saloon, they look at a rental property that Deborah has. Bands that come and play in the area stay there. She claims she has experiences such as the covers moving over her and a table hitting her in the shin.

As they look around, Aaron says he feels a pain in his side. Zak reports there is a ball of light and they get a voice, “I forgot something”, when asked why the entity is there.

When the investigation starts, they ask Raymond, the manager, to go down to the basement. He’s already admitted to being afraid of the area, but armed with a camera, he decides to stay as long as he can. He soon feels dizzy and sick.

They have Ray leave the basement and head to the bar area. He offers to buy the spirits a drink if they’ll take a seat with him. Aaron once again is feeling dizzy and sick. During this, they hear footsteps. Zak tries to get someone to sit at the bar and take his silver dollar. The SLS camera picks up what Billy believes is a figure trying to take the coin.

Zak now feels it’s their turn to head to the basement, believing it to be a nest of evil. Zak believes he hears screaming. These are followed by several knocks.

Meanwhile, Jay is in the crawlspace of the saloon and basically gets himself stuck. However, the situation changes when Jay says something pulled him by the leg. When he finally gets free of the crawlspace, he’s stabbed in the back of the knee.

And with these events taking place, Zak claims that the saloon is the embodiment of evil.

Let us take a moment and have a look at the claims we have for this embodiment of evil. It has caused a plant and mannequin to fall over. It may have left some scratches and possibly pinched someone.

Zak’s nest of evil produced the sound of people walking. It’s a tourist attraction with wooden walkways, it’s really no surprise to hear footsteps. If you recall from quite a few episodes ago, they proved footsteps carried a great distance when they heard people walking dozens of feet away.

We also have a woman scratched while eating dinner. Are we really going to assume that was the work of evil? She didn’t just accidentally scratch herself and snag a few seconds of TV time?

I have no doubt there were deaths in the saloon, but it’s really hard to imagine a woman would be trampled to death while a crowd did nothing but watch. If it did happen, it’s the work of one man and the only spirit involved in that terrible act, was the one he consumed too much of.

Jay claims there was nothing near him when he’s stabbed in the knee, however, the room is filled with debris just inches away, right at knee level.

Jay being pulled in the crawlspace was interesting. What are we to make of that? Was he pulled? Did he slip? Did he push himself in a panic? And where is the light orb that Zak claims accompanies these events?

The havoc this dark energy has wrought is scratching two people and pinching another. I’m not sure that qualifies as the embodiment of evil.