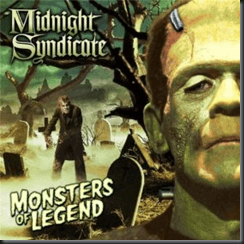 Amazon has put together a $5 CD sale and there are dozens of CDs worth getting. Almost all of the Midnight Syndicate albums are on sale as well as a vast collecting of albums from Nox Arcana and two albums from Buzz-Works. These are all Halloween and Gothic inspired songs that create a tremendous amount of atmosphere. These aren’t silly Halloween sound CDs either, these are expertly crafted orchestral pieces that will immerse you in their story.

During my travels through these CDs I discovered some new songs from The Immediate and Two Steps from Hell. This little sale is leading me on an interesting musical journey. If you’re looking for something new, give these a try and let me know where it leads you.

More bizarre trips into the odd an unusual. Midnight Syndicate is made for Halloween and this year they have a brand new CD. It’s Midnight Syndicate and the Carnival Arcade. The Carnival is a wondrous place full of excitement and feats of daring. But there is something odd an usual about it too. Clowns seem so happy and joyous and bring laughter to children. They also instill fear and apprehension.But not to everyone.  For those  there is something odd and strange. They can be the stuff of dreams or the things of nightmares.

The train smoke drifting through the pale moon light signals the arrival of the Lancaster-Rigby Carnival. In a forest clearing, these mesonoxian visitors await your arrival. Stroll along the midway and behold wonders both fantastic and macabre from every corner of the globe. And be sure to ride their one of a kind carousel for an experience you’ll never, ever forget.

For this year this is also the soundtrack to the movie, The Rage. A less than memorable movie, but that doesn’t deter from the enjoyment of the soundtrack. I really wanted this CD last year, but it wasn’t available in MP3 format. This year it is, and it’s already mine. Come along and get a glimpse of the unusual world of Doctor V.

Looking for something interesting to get the Halloween spirit moving? Give the Tron soundtrack a try. Plenty of interesting and tones and sounds in this one. It’s 23 song for a mere $5. You really can’t go wrong with that.