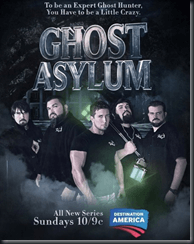 A new show has entered the paranormal arena, Ghost Asylum, put on by Destination America which follows the investigations of the Tennessee Wraith Chasers (TWC). For their inaugural episode the team heads to Scottsville, Kentucky to investigate the Old War Memorial Hospital which served as both a hospital and an asylum until it was closed in the late 90’s. It’s an old abandoned hospital that now servers as a Halloween attraction. People report all sorts of activity including voices, shadow figures, apparitions, footsteps and the appearance of one of the old doctors. An interesting location to be sure.

The TWC team is to do more than just capture evidence and sounds of the paranormal – their goal is to actually capture a spirit. Yes, indeed, their stated goal is to actually capture and contain spirit energy. The stuff of Ghostbusters fame is going to be attempted for real. Is it really possible to contain the essence of spirit energy? And what would happen to the entity if such a thing could be done?

To be honest, I’ve had my fill of paranormal shows and while I’m always ready to see what they have to offer, Ghost Asylum won’t have me as a fan. You don’t even have to watch the show to know there will be a blip on the Mel Meter, a jump on the K2, a shadow figure and some horribly grainy and low voice speaking to them. This is nothing more than a rinse and repeat of everything else that’s been on in the last 8 years. At least these guys stay and do more than one night’s worth of investigations and they actually go into the location during the day to get some baseline readings. They at least get credit for that.

The hook to make their show different is the want to actually capture a spirit. That actually sounds incredibly interesting and ambitious, but when it all comes together it almost laughable like some horrible high school science fair project gone wrong.

Their "ghost trap" consists of a couple layers of chicken wire, a capacitor and solar cells. The chicken wire is charged which draws in the spirit and then the capacitor captures the entity. On the one hand the idea sort of makes sense. If spirits are indeed energy then "storing" that energy in a battery is plausible. But when you see the whole thing cobbled together it doesn’t instill confidence in any sense of the word. Their experimental equipment makes me roll my eyes just it did for all the ridiculous gear I saw on Ghost Lab.

It’s really hard to believe that 5 guys from the hills of Tennessee are able to capture spirit energy using chicken wire and solar cells. Seems like it should be a little scientific and high tech. I suppose low tech answers can be just as good, but this seems a little silly.

Anyway, I’ll tune in for another episode just to see where this goes, but I doubt it’ll change my mind. Paranormal shows are all doing the same thing with the same cast of heavy set, beard wearing, I know how to make electronic devices no one has ever seen before, guys like every other show. The investigation is the same, the evidence is the same, hell even the shadow figures are the same. At least they aren’t gasping every time they hear a sound or standing with their mouth hanging open because they thing something crossed their path.

The timing is right for another paranormal adventure and I’m always looking for something new. I’ll see what next week brings, but I’m pretty sure I’ll just keep waiting.

One Response to Ghost Asylum S01E01