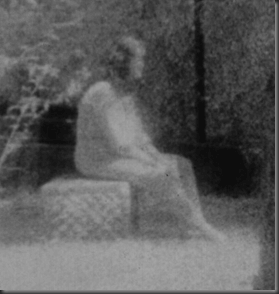 For this episode, Zak, Nick and Aaron head to Chicago to investigate a nightclub with paranormal undertones and a cemetery alive with activity. But first, they have to get through the protest rally. Seems their timing is a little off and they arrive right in the middle of a NATO demonstration. Hunting for ghosts or fending off the police, which would make the more exciting episode?

The investigation starts off with Bachelor’s Grove, which is a sad story unto itself. What used to be a small cemetery with about 200 plots has been abandoned, giving way to vandalism, grave robbing and even reports of Satanic worship. Almost all of the headstones have been smashed and knocked over. The area has supposedly been used for dumping bodies by the Mob. Overall, a place that should be treated with respect is getting no such thing.

Many people report having experiencing such as seeing shadow figures, people walking around, and taking photos of unknown animals lurking in the growth. This is also the location of the famous/infamous photo of the apparition sitting on the grave stone.

With the help of the local police and park service, who guard the perimeter, the guys head in to see if they can substantiate any of the claims. They are immediately on the trail of some sort of floating orb that dances through the forest. While they crash through the growth, breaking twigs, crushing leaves and making plenty of noise, this ball of light moves effortlessly along without making a sound. The officers report that no one is in the park except them.

So what do we have here? Is this an orb of energy leading them out of the cemetery so they don’t disturb the spirits? Or is this a lightning but or something similar just floating around? Was there someone else out there hiding in the growth just trying to mess with them? There is certainly something there, but a fuzzy ball of light out in the distance with no sense of scale does not a paranormal event make. Even Sergeant Joe says people claim to see orbs and as such he doesn’t seem at all surprised by their comments. But more investigation needs to be done on that one.

Besides the orb, they claim to pick up an EVP of "____ is coming" and when asked if they mind people in the cemetery they get a response supposedly referencing the ball of light they’ve been chasing.

With that investigation done, they head over to the Excalibur nightclub to investigate reports of people getting pushed, a girl wandering the third floor and a candle being lit that is too far out of reach for a normal person to be able to reach it.

The former manager claims to have seen the little girl roaming around. He encountered her after being told there was a girl lost in the upstairs of the club. A waitress at the club has felt hands at the back of her head while getting ready for work. And more than one person has been pushed down the stairs. The manager is certainly a believer, he doesn’t work there any more and wouldn’t spend the night there if he had to.

The guys try several experiments, even Zak standing near a ledge asking to be pushed, with no results. They aren’t able to get any EVPs, nor do they capture any physical evidence. However, both Zak and Nick almost fall down the stairs. They both claim to get disoriented and then almost immediately fall over. Zak is clearly falling backward in that typical slow motion replay they like to do. So what happened? Did Zak simply take a misstep while walking on the narrow stairs in the dark or did something actually come out to push him? Was it perhaps the little girl that has been seen? Was it the same thing that touched the waitress on the back of the head? Is the lack of evidence just wishful thinking in the paranormal?

In the end, I really wish the guys would have done more of an investigation in the cemetery. Considering all the claims surrounding the place, they barely scratched the surface. They didn’t do anything in regards to the headstone where the apparition was photographed, they didn’t do any real EVP sessions, they didn’t have their usual static cameras set up to capture the graves. I’m fine with them not capturing evidence, because I don’t believe every place they go and every claim they hear is part of a burning cauldron of the paranormal. But this episode feel short because they didn’t give it their best effort. There was so much more they could have done. Considering the vandalism and disrespect for this cemetery it’s entirely possible there are restless sprits who are down right pissed off at how they’re being treated. Their graves are getting dug up, their bones are being tossed on the ground, their markers are being smashed and a bunch of drunken teens are masquerading as Satanists. It’s enough to truly piss off the living. But did we capture evidence of the spirit world? I’m not sure sure.