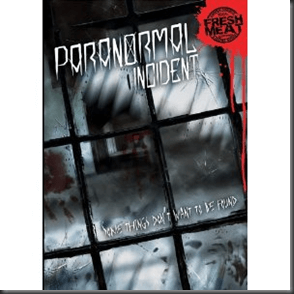 In order to get a decent grade in their glass, a group of friends head out to film paranormal events at the abandoned Odenbrook Sanitarium. With both skeptics and believers in the group, they encounter more than they can handle in this "lost footage" tale. But what could have been an interesting tale of the lone survivor of the incident trying to clear his name for the murder of his friends as he goes through the recovered footage, goes a bit South and gives us an ending that doesn’t even make sense.

It’s a plausible scenario; friends go out to investigate an asylum and to give them some thrills and chills, one of them breaks away from the group. He locks them in with the intent of returning later to scare the crap out of them. But as the group does their investigation things go sideways and they realize something is out there and it’s in no way friendly.

In the style of Grave Encounters, Blair Witch and Paranormal Activity, we follow along with the jerky camera movements and things moving in the shadows. As the night moves on, the group realizes they can’t leave and panic ensues. They fight, argue, spew vulgarities and lost trust in each other. Soon, it’s every man for himself. Unfortunately, amidst all the screaming and hysterics there’s no plot. There’s nothing to hold this together. There is the lose idea of patients being abused and a mass suicide from 60 years earlier. The footage is intermixed with "visions" of the past, but how it all ties together is the big mystery. It’s an interesting premise and there is a lot to work with, but they can’t pull it together. What we end up with is haphazard investigation that leads us nowhere.

The acting within the "lost footage" is tolerable, barely, but the hospital scenes are just tragic. You begin to groan as soon as they cut back to hideous green and white walls of the hospital room.

While there was nothing compelling about this movie, I kept watching so I see the big reveal and find out what’s behind the events. But the big reveal doesn’t come and I don’t know what the hell kind of ending we’re given. We’re dropped in the middle of some craptacular X-Files ripoff and I don’t know what the hell just happened. What is this mess? How this ending fits with the rest of the movie I don’t know, but I’m terribly confused.

The ending completely ruins what could have been a decent, and I use that word loosely, low budget scare. There are some moments of fun in this movie, but by the time you get to the end, you’ll want to throw something.