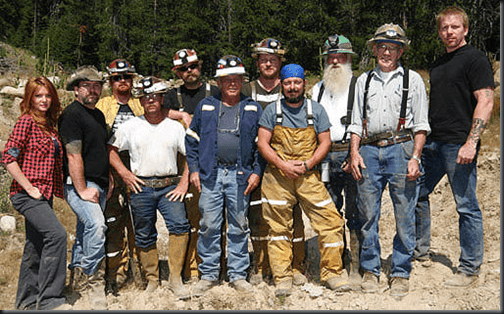 First of all, I have to say I’ve really enjoyed this series and have no doubt it’ll be back for a third season in Arizona to investigate the mine Stan and Kristen checked out. It was a nice segue on their part.

As for this season, I think we’ve seen the end of the Crescent. I don’t think there’s any way to realistically come back from that cave in. But that also makes you wonder and question all the evidence we’ve seen up to this point.

When it comes to the noise and all the bulkheads it makes you wonder if the Mason’s didn’t use them as a warning because they knew the mine was unstable. While I think Patrick and Kristen found some interesting evidence, I really don’t buy into the idea that the Masons were trying to keep something demonic trapped in the mine. Based on the obvious instability of the place it comes across as a safety precaution more than anything else. Instead of sinister gestures, they were trying to bar the doors so people didn’t get trapped when the inevitable cave in happened, like we saw for the finale. Maybe this isn’t the first time this has happened and they were trying to prevent another series of accidents.

Another theory is perhaps those bulkheads were indeed a way to people out of the gold, but, why put Masonic symbols all over them? Isn’t that just going to create curiosity and have them think it’s a good idea to bust down the walls just like it did for these miners?

In retrospect, the sound of working miners is truly fascinating, but taking a step back it may be nothing more than all the wind and shifting rock of the area. We know it’s unstable, we know there is air movement since they busted through, and we know rocks and timbers have been falling.

I don’t know that we have phantom miners who drove the last crew out versus an unstable working environment. Maybe the crew knew this mine was unstable and got out of there before it collapsed. Maybe the mine owner wouldn’t spring for safety equipment because he had no cash and they walked out. Knowing what we know now, it may have been bad working conditions.

But there are some remaining questions. What happened to Eddie? Was he indeed touched by something unearthly? It left him a little speechless, so who knows what we have there. We also have the video camera glitches, which may or may not been bad wiring, the shadows that Jay and Jamol feel they saw. Perhaps all the ghost talk was getting the better of them? And overall, did the Masons simply own the Crescent mine and sealed it off after an accident or did they use it for ceremonies? Were the simple mine owners or as Patrick continually implies was there something sinister afoot?

We can speculate all we want, but to be honest, when all is said and done, I don’t think the Crescent mine is haunted. I think it’s unstable, I think good men died there at the hands of hate and prejudice, I think the mine owner may be a little on the cheap side and I think the town is shrouded in legend and myth. I think there were some very bad deeds done there and some downright evil and callous men. And while the Masons will always have a bad reputation, I don’t think they had any evil intentions. They may be guilty of mistreating their workers and not providing equal pay for equal work, but I don’t think they’re hiding a demon deep under the earth.

What I can say is that it was extremely fun and rewarding to watch Patrick and Kristen investigate the same place over and over again. We don’t get to see that. It’s always a one night stand and then on to the next. I didn’t always agree with their findings or interpretation, but I like their work and for the most part their approach. It was also great to watch the mining process, to see the problems, the dangers and the solutions. We got to see these guys bond together and considering they’ve spent two years together, they really have come to rely on and respect each other. Even if Jamol isn’t the greatest cook in the world I think they appreciate him all the same.

I will say that Stan was perhaps the most interesting and entertaining member of the cast. His calm and casual demeanor was so much fun to watch. Nothing seemed to rattle him, he kept his cool, and always took a moment to think about the situation before making a decision. The only time you see him rattle is when the world is coming down around him. As soon as it’s over though, he’s back to his calm self. I think it would be great to sit around a campfire and listen to Stan tell stories of his mining days. I bet he has some amazing tales. He’s been doing this a long time and I’m sure he’s seen a lot.

So it’s the end of the season and now we have to wait to see what’s next. Like I said, I have no doubt we’ll see this same time next year is Arizona. That mine had potential and this team is garnering some star status. We’ll have to wait and see where we went up.