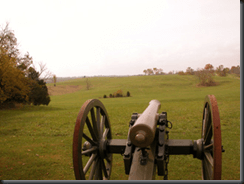 The Ghost Adventures team returns a location they visited in the past, the Rocky Point Manor in 2011. This time they’re investigating two houses turned field hospital in Perryville. The homes were smack dab in the middle of an extremely bloody battle. As we know, a field hospital was the greatest place of healing. In times of battle they spend more time sawing limbs off than putting soldiers back together. There was perhaps more pain an suffering inside the hospital than on the battlefield.

These two homes are known for their bloodstained floors, which Zak actually proves using luminol. This really shouldn’t come as a surprise due to the vast amount of amputations that would have taken place, but it does make the pain and suffering more tangible.

As the investigation gets underway, the team brings in a group of re-enactors who give a glimpse of the drama associated with a field hospital. As they play their roles and the chaos ensues, they all relate how they feel sadness, a heaviness and that it became more real than they intended.

Zak makes contact with "Daniel". He carries on a brief conversation before they lose contact. It turns out there was indeed a Daniel McIlwaine that died on that battle field in 1862.

Zak also gets a voice saying, "who’s there?" and "hide, they’re here". This might indicate the house was under siege at some point.

There are lots of footsteps in the house. This has also been witnessed by other investigators who say they hear someone pacing the floor upstairs. It’s still and old house and those footsteps could be any number of things. Many animals sounds and wood expanding sound like footsteps.

One unusual piece of evidence is the Ovilus falling to the ground. Part of the device is still on the table while the other is on the floor. The two pieces are tied together with velcro. In order to fall apart, someone would need to undo that strap and disconnect the wiring. The team is quite certain spirit energy caused this to happen. It’s sort of hard to jump on board with that one.

They do get some interesting EVPs coming through and they do locate the name of an actual soldier who died during the battle. Are the soldiers from the past still walking the grounds? Are they still engaged in battle? The re-enactors certainly believe so.