Haunted Highway – Beast of Bray Road and Tonopah Mine – S02E03 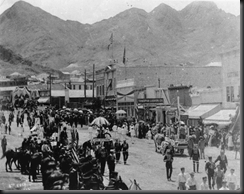 The Haunted Highway team heads out into some frigid temperatures in search of some odd creatures and some wild legends. First off we have the Beast of Bay Road which people describe as some sort of werewolf like creature  at least 7 feet tall. Jack and Dana head to Nevada to investigate an abandoned gold mine where they have the story of miners trapped in a fire, the legend of Bloody Babs, a prostitute that pistol whipped another woman and several other deaths caused by machinery and man.

The story of the Bray Beast sounds a lot like the stories of the Skunk Ape, Skinwalker, El Chupacabra or even the Jersey Devil. The residents claim there is some wild beast living in the forest and eyewitness claims it came up to her car and pushed it into a snow bank. Who knows what we have with this one.

As Jael and Devin trudge around in the snow they find all sorts of animals tracks and even leave out some meat for the beast. Oddly, their camera gets knocked over, but the meat remains untouched. The tracks they find aren’t big enough to belong to their beast.

For the second night of their investigation they head to the Kettle Moraine forest where they hear plenty of howling in the night. Using the thermal imager they find an interesting scratch mark on a tree. Could be evidence of their beast. As they lie in wait, there is something moving behind Jael. You can just make it out then it takes off. If you slow that footage down, it’s pretty much a deer walking around. Even the book author says they need to follow a deer trail. What are you going to find on a deer trail?

There’s plenty of animals out there, but I doubt there is anything more dangerous than a deer.

Jack and Dana freeze themselves solid as they investigate the Tonopah Gold Mine, the site of a mine fire  as well as the previously mentioned Bloody Babs. There is also the sounds of miners still working and seeing their apparitions.

Jack and Dana visit several locations trying to get a response. Everything seems to be pretty quiet overall, then they hear some noises on the walkie talkie and Jack hears a loud bang behind him as he asks if anyone is there with him. They both get quite unsettled over this. But let’s be honest here, they’re in a mine and it’s freezing cold. There is machinery around and it’s obviously metal. You have to expect creakings and bangs as it contracts in that cold.

There is also the matter of the walkie Jack had tied to a 50lbs test line. It has mysteriously broken off. I don’t know how far off the ground it was, could it have been an animal? We don’t know if it was transmitting data back so knows if we captured anything. Clearly the device is gone which is too damn bad. Maybe it captured something cool.

Unfortunately, I don’t feel they captured too much evidence on either investigation. As far as the Bray Beast, what they unearthed was nothing more than a deer. On the whole I think the entire story is simply mistaken identity. I wouldn’t be surprised if they’re just seeing large deer roaming around. And as far as the eyewitness is concerned? People will say anything to get on camera. Come on…

While Jack may think the Tonopah Gold Mine is haunted, I have to disagree. I don’t think they captured anything that even remotely supports that claim. I don’t see anything tangible that shows there are trapped miners still working or the spirit of Bill Murphy still helping lost souls trapped in a fire. Both locations are neat, but I don’t think they walked with any real evidence.