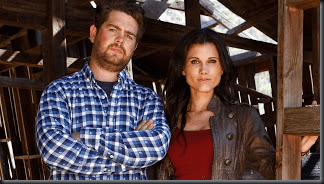 For this investigation Dana and Jack tackle the Manchac Swamp which has the bizarre tale of multiple people dying at the funeral of Julia Brown, while Devin and Jael investigate the Moonville Tunnel located in an abandoned mining town and is said to be the location of 26 deaths.

Supposedly there was a local woman named Julia Brown that said when she died she was going to take everyone with her. True to her word, those attending her funeral were killed. The town had another problem that when a hurricane came along, the town was wiped out. As bodies were found they were gathered up and put in a mass grave at the high point of the swamp. That’s were Jack and Dana head.

It’s a dilapidated shack where people claim to see the lady in white, hear singing and see lights. As Jack and Dana look around something quite mysterious seems to be lurking in the water. At first glance it looks like a bizarre mist. It might even be something swimming just under the surface of the water. It does seem to gurgle and bubble and when Jack mentions it could be methane gas, it really begins to make sense. There is another piece of the footage where the water is bubbling at certainly looks like gas escaping from under water.

Another interesting piece of evidence is from the GoPro that is scanning the area. It looks to capture some sort of ghost or figure in the trees. It’s there one second then gone the next. At first glance it looks quite bizarre, but if you step back for a moment it more lends itself to camera glare. It feels more like a trick of light than anything else.

And thing that happens is Jack and Dana try to contact Julia Brown. Dana lights a series of extremely large candles. While asking questions, every one of them gets blown out. This could be a gust of wind or some gas heavier than air drifting through the swamp, but it’s pretty odd and interesting on it’s own.

Devin and Jael investigate and old train tunnel associated with coal mining. The tunnel is quite literally all that remains. The entire town has disappeared. As Jael and Devin discover, the only thing left are a couple of moss covered cement slabs.

The tunnel was used as part of the railway during the coal mining days. 26 deaths are attributed to the train including two trains that collided. People claim to see apparitions, strange sounds, rocks being thrown, the feeling of being watched and the smell of something sweet. These are each connected to one of the deaths that took place.

As Jael and Devin investigate the do hear rocks falling as well as smell something sweet. Devin also feels some presence get very close to him and brush in front of his face. They also feel they see some figure walking around. There is a story of Baldy Keaton, a bully apparently, and when the team tries to speak with him they get the sound of rocks falling. When reviewing their evidence they also feel they get a voice saying "murder".

Both of these locations make for some interesting stories, but do they contain paranormal activity? The swamp has a pretty bleak past and certainly some odds things happen out there, but are people mistaking natural occurrences for the paranormal? And when it comes to the Tunnel are people letting their imaginations get the better of them? Falling rocks and phantom smells certainly have more earthly explanations.

Are these locations haunted or do they just have some interesting tall tales associated with them?