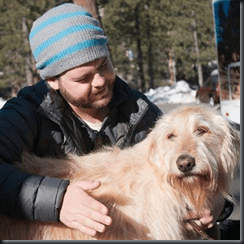 Devin and Jael head down to South Carolina to investigate the South’s own little Loch Ness. There are reports of something large swimming in the lake. People report it’s hit their boat and has scales the size of your hand. There are multiple sightings, but nothing concrete.

The investigation yields a few interesting things as Jael and Devin head out onto the lake and ultimately end up in it. Their trip to the island where there have been sighting shows a large shadow in the water as the seagulls hover just above it. As they set up camp, there is the distinct sound of splashing in the water. When they take to the water something does indeed bump into the boat. Whatever it was gives the boat a pretty good knock.

Since they’re getting activity, they break out the scuba gear and head down into the lake to have a look around. While it’s pretty murky, something passes in front of the camera. And while they’re under water something hits the boat again.

The creature on the camera turns out to be a sturgeon, which makes sense. But, they’re told the sturgeon in that area several hundred pounds. Are people just mistaking a damn big fish for some aquatic beast? This would also explain the hits on the boat. A fish that large could certainly give the boat a good nudge.

So what do we have here? Is this mistaken identity or is the Lake Murray Monster still elusive?

A grim story to be sure, Jack and Dana try to make contact with the Donner party. People report seeing lights and shadow figures. It’s a cold and bleak night, not unlike the conditions the Donners would have faced. With multiple cameras running, Jack actually gets an interesting hit on the FLIR. There is a large mass standing next to a tree. It’s there one second and gone the next. It’s possible that was a hunter or someone else out there, but the heat signature seemed wrong. They also capture something in the woods as Dana and their borrowed investigative hound scout the area. Might just be a small animal, but it has the dog all riled up. In fact, the dog has been distressed through the entire investigation.

But it’s more than just a thermal hit when Dana feels something scratch her on the neck. Immediately after she’s consumed with nausea and becomes physically sick.

And finally they get another thermal hit of a figure by the trees. This coincides with some lights they see off in the distance.

Jack and Dana come across some interesting evidence from their investigation, but it’s hard to tell what they’ve got. They capture a figure, but they’re in the woods so it could have just been another person out there. It’s not like they roped off the area or anything. Was Dana scratched by an insect or something falling or did something reach out to her? Were the lights something paranormal or a reflection from a car, house or campsite? They had some interesting experiences, but as Dana says, are they letting their imagination get the better of them?