Forever – Interesting stories and an interesting look at life 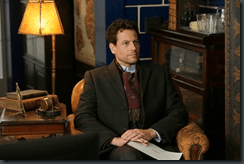 There are several things I like about Forever, the first being it’s actually got a British actor using what I assume is his natural speaking voice and it has interesting mysteries to solve. I have to say, I think it’s a shame that US shows hire foreign actors and then change their voices. You can hear this in the Mentalist, Rush, House and others. Considering most people enjoy hearing a different style of accent, why does this keep happening?

Anyway, Forever actually has a nice sound to it and I like how there is a narration where we get to hear more about a character and what they’re thinking. I liked how Dexter used this and it was also something we heard (although not very often) on the show Silk Stalkings way back in the 90s. I think this is a neat device and I think a show like Forever uses it to their advantage. There is a whole lot of backstory for Henry Morgan so it’s nice to get a little bit of that insight.

I wouldn’t say it’s subtle, nor would I say it’s blatant, but there is the undertone of what goes into a life. Henry has lived for 200 years and he sees it as a curse. Would the rest of us feel that way? What we do if he had nearly unlimited time? Henry speaks of relationships and growing old and what it’s like to love and lose that love. While none of us can live forever, there is the message that we should make the most of the time we have. What does tomorrow bring? As we see from the opening minutes of the first episode, life can change in an instant. We never know what we’ll get to finish tomorrow.

I like the stories so far and I like the message. Perhaps we do need to take a step back from the computers and Twitter and Facebook and phones and focus on the people around us. Perhaps we should take that time to read a book (to our kids) rather than sitting in front of the TV. Or perhaps I’m getting a little sappy.

Another thing I like is that the CGI is a minimum so far. I grow tired of shows that zoom in on a totally pixelated and grainy picture that magically becomes crystal clear, or they run through millions of photos in seconds and find the person their looking for through facial recognition. I know what computers can and can’t do so it’s nice to see someone using their brain and going with their instincts for a change.

So far, a pretty neat show with characters I like and stories that are actually interesting. Hopefully this one will stick around for a few seasons.