What lies in store if you live Forever? 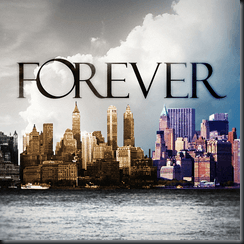 So ABC presents us with a new show called Forever, a slight twist on the old idea of living forever. No, character at the center of our story, Henry Morgan, isn’t a vampire (thank goodness), or werewolf (not that we know of), or highlander (at least for now there is more than one), but rather a man who isn’t quite sure how he turned out the way he did. He’s been around for 200 years and for the most part seems to be at ease with the world around him. He’s used his time to learn, study and try to do some good in the world. He’s even managed to create his own little family.  But now on the horizon something is brewing and Henry comes to realize he’s not the only one.

While the opening story feels a little reminiscent of Unbreakable, there are plenty of hooks that will have me back for another episode. There are some tinges of Sherlock Holmes as well, but that is in no way a bad thing for me. He certainly should be a keen observer after 200 years of watching people. So it looks like Henry will use those powers and the vast knowledge he’s stored up to help people in modern day New York. The Big Apple isn’t too bad a place to pick if you want to be anonymous and working with the police will give him plenty to work on. I wonder if he’ll bump into Sherlock on his adventures?

Anyway, I think this can be an interesting series with plenty of room for some intriguing stories and a look at what it means to be alive. What defines us? What makes us who we are? What will we be known for with the time we have on earth? Perhaps that’s reading a little too much into it at these early stages, but Forever was pretty good. I’ll definitely stick around for another episode of this one. Hopefully, he won’t be a vampire or genetic experiment, that will just ruin the whole mystique of the show. And besides you have to admire a guy who walks around with a 300 year old pocket watch.

Yes, yes, there were tinges of Highlander as well. The first movie in that series was pretty damn good you have to admit.