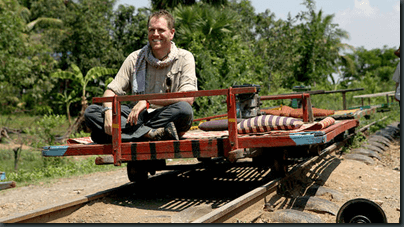 So the story of Indiana Jones and the Temple of Doom is just a story right? No bearing on any sort of real life events? Well, that may not be entirely true as Josh heads to Cambodia to investigate the lost city of the Khmer Empire and search for a mystical relic that turned King Jayavarman into an unstoppable force. It is believed that King Jayavarman was able to call down the powers of Kali and use those powers to conquer and incinerate those who stood in his way. Sounds pretty impressive! The source of his power? The Linga, similar to the mystical stones we saw in the movie. You basically take the Linga (male) and combine it with the Yoni (female) and then all hell breaks loose.

Like all good adventures, this one starts off with a trip to the market. Josh indulges in some fresh vegetables, fresh fish that won’t stay in the basket and takes a sample of some mutant bugs. Josh also pays a visit to the Cambodia War Museum and has a look back at some of the darker times of the area. It’s quite shocking to see pictures of children, held in chains, posing for their last photograph. Power does strange things to people.

And if that weren’t enough, there is still the grim reality that the land is covered in million of active land mines. Josh pays a visit to a man who personally laid thousands of mines in the area, but is now trying to make amends by going out and defusing as many as he possible can. And just because the mines are small doesn’t mean they aren’t deadly as we see when Josh heads out with the team, discovers a mine and detonates it in a safe clearing. But pay attention to their technique. These guys have the most flimsy bomb suits I’ve ever seen, they handle the mine with their bare hands and just explode it in an open field. That just a bit on the nutty side.

To get an idea of what he’s up against, Josh meets with a few locals and realizes he’s in for a multi-hour 4×4 adventure and then a trek up a mountain that is most likely littered with live land mines. What could possibly go wrong?

Well, what happens when you run out of road? You jump on a make shift train of course. Seems there is plenty of railway lines left behind and the good citizens have built their own transportation using rotting wood, rubber bands and repurposed lawn mower engines. And these vehicles are easy to take apart too, as we see when there is a minor traffic jam on the rails and the villagers simply pick the tram up, move it out of the way of oncoming traffic, reassemble it and go about their journey. To be honest, riding along on that motorized cart looked like wickedly good fun!

Once he reaches his destination it’s time to check one of the natural features of the area which is a cave with a rather indecent looking opening that is home to millions of bats that make a food migration each night as the sun sets. And as if on cue, the bats stream out and darken the sky. While amazing to see from the comfort of distance, that would have been both creepy and skin crawling to be under.

Josh then speaks with one of the locals who is familiar with the lost village and with the suppose power of King Jayavarman. They would prefer to keep the location of the dig and the site a secret since people have been known to steal relics from the site and sell them on the black market. It seems the idea of tomb raiding is very much real and happens all the time.

Going by helicopter and by less than impressive motorcycle, Josh makes his way to the dig where he gets a quick tour of the excavation in progress. While the conditions don’t look ideal, the work and the discovery they’ve made look amazing. At the dig, Josh talks with Pich who takes him to a brand new site they’re working on and shows him a massive Yoni where it is believed rituals took place. Is this the one used by King Jayavarman? Most likely not, but it does prove rituals took place and the power of magic was very real to the people in this area. Amidst the massive thunderstorm that bears down on them while they investigate some caves by torchlight, Pich and Josh make a getaway through the darkness and hold up in Pich’s house for the night. It seems a nice little place powered by a small generator that turns off at 9:15. Lights out Josh, good night!

While Josh didn’t find the Linga and Yoni that could give him ultimate power, he did give us a grand tour of a beautiful country and a wonderful people that live out a simple life. There is plenty evidence out there being uncovered as we speak. Perhaps in another couple of years, when the dig is further along, we will get more chapters of this wild and interesting story. Does this Linga exist? Can it really bring about destruction? Who knows, but people have looked for stranger things haven’t they?