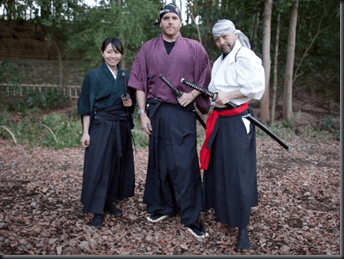 This is an intriguing episode as Josh heads off to Japan in search of a mystical Japanese sword called the Hanjo Masamune. The sword was forged in the 13th century and is said to not only be the finest blade ever made, but had the power to never kill an innocent man. It is said that whoever wielded the Hanjo Masamune would be the ruler of Japan. And that’s exactly what happened. Through the years the sword was handed down through generations. While the story associated with the sword seems the stuff on anime cartoons, the sword itself is in fact real. It existed and was tracked all the way until the end of World War II. At that time, as Japan surrendered, all small armaments, including swords, were to be handed over to the government. The sword was handed over to the police and then promptly disappeared. The location of the sword remains a mystery. Some believe it may have come to the US. Others believe is may be in a temple. Or it could have ended up on the black market and is in the hands of a private collector.

To start his investigation and gather information Josh talks with Tsunenari Tokugawa who is the 18th generation of the family that once ruled over Japan, with the help of the Hanjo Masamune sword. Mr. Tokugawa shows Josh his family mausoleum  that contains the remains of many Shogun generals. These would have been men that most likely wielded the actual sword. Mr. Tokugawa believes the sword is most likely in the hands of an individual collector.

To learn more about selling swords to private collectors, Josh meets with a man who sells swords in this rather murky market. The dealer has some information about the sword including what it may really look like and the blade pattern. If the real Hanjo were to come on the market, it’s blade markings would have to match. Interestingly, swords sold through regular channels come with certificates that prove who the sword was made by and when.

And then to learn about the sword making process, Josh visits Tsunahiro Yamamura who’s a 24th generation of Masamune. That is quite amazing and actually puts his family as slightly older than that of the Tokugawa family.

Mr. Yamamura is a master sword maker and shows Josh that the swords are hand made over several weeks. The steel is heated dozens of times to create strength and purity. Josh is given the honor to actually pound the metal for a new sword being made. Since I’ve always been fascinated with swords and knives, this was quite exciting to watch.

But to really know about the sword, Josh needs to wield one. And with the help of an expert, Josh goes out back and is shown how to make strikes with the blade. He does surprisingly well and it shows just how sharp the blade is. Josh makes incredibly clean cuts through the bamboo mat. Does he a touch of the Samurai DNA?

The next stop is a series of tunnels where the sword may have been kept after being turned in. When the sword was turned over, it may have been kept or perhaps smuggled into these tunnels. Josh meets with Michael Gakuran who has been given permission to explore this area in search of the sword. He and Josh spend some time down there, but don’t actually discover the sword. But as Michael explains, there are miles of tunnels and they’ve barely started searching.

As Josh continues to search for answers, he meets with Tetsuro Shimaguchi who shows him what it’s like to train like a Samurai warrior. He gives Josh just a brief glimpse of the moves, posture, stance and balance it takes. Then, he tries what he’s learned with one of the students. Needless to say, Josh doesn’t stand a chance. But it does show the intense discipline and training it requires to handle this sort of weapon.

It is believed that the sword may have found it’s way into a shrine and since there is one close by, Josh heads to the top of the mountain to have a look around. We really don’t expect Josh to find the sword and this is more of an excuse for him to ride a motorcycle and see the spectacular landscape. Can’t really fault him for that, the scenery is gorgeous.

But there is a monk at the top of the mountain and while the shrine does contain treasures, it’s not the sword and the monk informs Josh he is surrounded by treasures in the form of the trees and mountains. He’s quite right.

Finally, Josh meets with a sword collector who’s family has been in the business since 1874. While we’re certainly not expecting this man to hand over the ancient lost sword, he certainly has something worth looking at. While not the original Honjo Masamune, it is a sword from the same maker. Josh is holding a Masamune sword that is around 600 years old – and it is stunning. This is all hand made from a single piece of steel. The sharpness and quality are amazing. Josh is holding a wonderful piece of Japanese history. And the Honjo is supposed to be even better. Hard to imagine.

We never really expected Josh to find the sword, but what a fantastic journey. Japan has such history and always seems to be cloaked in mystery. Even with this small glimpse into the origins of this sword, it’s a fun journey. The samurai way of life and the code they lived by is something to behold and if there is a true tangible item that encompasses that way of life and represents such power and honor, I truly hope one day it does reveal itself.