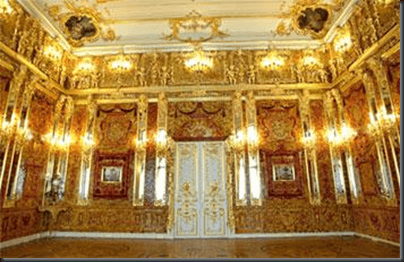 For this episode, Josh is off to find treasure of a different kind. He’s not merely looking for an idol, a cup or even a treasure chest. For this excursion, he’s looking for an entire room. Yes, there was a room called, "The Amber Room" that was part of the castle for Catherine I. It was an awe inspiring, albeit a little gaudy, room covered in Amber, precious stones and gold. And not just some little closet sized thing either, but a massive banquet room. Clearly there are no small rooms in a castle.

Rumor has it, the Nazi’s invaded the Soviet Union and took over the Amber Room. They showed it off to high level officials and used it flaunt the wealth of their empire. When the Allies came to get them in the 1940’s the Nazi’s completely dismantled the room and the contents disappears. Rumor has it the amber and jewels were peeled off the walls, stored in crates, shipped out by train and stored underground in a secret location. Josh is out to see sort of leads he can discover about this missing treasure.

There are several possible locations the treasure could have been taken to. The first is the old German palace itself, which now lies in ruins. Josh heads to Kaliningrad Castle which still has a series of unexplored tunnels underneath where the castle once stood. The castle was leveled during 1945, but it might be possible the treasure is locked underground. After a bit of negotiation, Josh heads down there and has a bit of a look around. There is a lot of area to cover and he’s not even close to being equipped for the job. But while there, he talks to a man in charge of excavating the site and they have already found numerous relics. Nothing along the lines of the Amber Room, but it does show there are artifacts down there.

Next up, Josh is off to Berlin to check into the theory of the crates being shipped off in the middle of the night by train. It appears there were 6 extra railroad cars, but when these cars reached their destination, they were empty. So where did their contents go? Well, that is the question and one theory is they ended up in some bunkers hidden away in a nearby forest. Oh, this sound good, and sinister, and scary.

Josh heads out to the forest and indeed finds some of the very bunkers he was told about. They are overgrown, filled with junk and water, but they could easily hide that which people don’t want to be found. After a bit of a trudge in the murky water, Josh realizes he’s nowhere near equipped to go looking around this unstable area and moves onto the next location.

A CIA informant tells Josh about a letter he found which details four trucks worth of crates that were only transported by night, but have no official description. These unknown items may have been carted off to the tunnels of Deutschneudorf. Without delay, Josh is once again hot on the trail and who do you reckon he meets up with? Why the mayor of Deutschneudorf of course. And not only is he willing to discuss this Amber Room with Josh, he’s hot on the trail of it himself! They mayor has a full blown excavation going on.

The mayor explains that he has documents and tips the crates that contain the contents of the Amber Room are hidden down in the tunnels of an old factory. The factory in question was built on top of some silver mines and it was known to take in shipments by rail. It is believed the crates were taken down a secret entrance and buried deep in the old mine tunnels so it couldn’t be bombed or stolen. Josh heads on down and discovers some amazing chambers and intricate stone work. Clearly this is not your average silver mine. These rooms had some other purpose while under the control of the Nazi’s.

But as Josh, the mayor and the translator push ever forward, they discover the going to be flooded and unstable. They get to a point where perhaps the beams aren’t quite up to the challenge of supporting the weight of the world on their rotting shoulders. It’s a hasty retreat by all back to the surface.

Josh doesn’t come away with the treasure, but it seems like there are at least three plausible locations for where the treasure of the Amber Room may have gone. More work needs to be done in each one to make it safe to explore. But it goes to show that there are plenty of secret locations under ground and that when it comes to treasure and the Nazi’s, those items could be hiding anywhere and until they’re discovered, it’s well worth looking and following up on each clue. Rare artifacts and paintings are showing up all the time, it may just be a matter of time until the crates containing the Amber Room surface in the most unusual of locations.