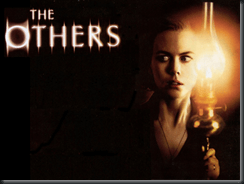 While browsing movie selections on Amazon, I was recommended The Others on Blu-Ray. I thought The Others was a great movie and for a mere $6 I could get the Blu-Ray edition. Two days later it was at the front door and I sat down to watch it again.

We start off with Grace and her two children alone in their house cut off from their neighbors and the rest of the village. The war has ravaged them and to make matters worse, the regular servants have packed up and left during the night without saying a word.

But all is not lost, three new servants who happened to have worked at the house before come strolling by looking for work. Desperate times call for desperate measures and Grace brings them on board to help with the house. But they must understand that the curtains must be drawn at all times. Her children are allergic to the light and if exposed they will blister, suffocate and possibly die. That alone means the house is lit with meager lamps and we spend most of the time is in an eerie darkness. Not to mention there is a thick fog that hangs about the house and if you stray too far, you lose your bearings and won’t be able to find your way back.

It’s not just the darkness though. There is something odd about the servants. They seem to be hiding something or perhaps are in the midst of hatching some sort of plan. Further, it seems that things are moving around in the house and they hear voices and footsteps. Soon, the daughter Anne says she sees and hears a little boy Victor, who says the house is theirs. Soon Grace realizes that noises she attributed to the servants can’t be from them because they’re not even in the house when she hears them. They now have intruders.

To confuse matters even more, Charles, Grace’s husband mysteriously shows back up to the house after being presumed dead in the war. But something is wrong. He’s distant, lost, aloof. His affections seem to be running away from his high strung and nervous wife.

From there we start to learn about many truths that took place in the house and very little is what it appears to be and not everyone is who they claim to be.

The first time I watched The Others, I thought it was great. It was an atmospheric and creepy movie that used mood and lighting to create tension. There are no scenes with chainsaws, or people being hacked to bits, or blood, or nudity and only a hint of violence. It’s sort of a like an Agatha Christie movie where everyone has a motive yet you’re not sure of their intentions. We get a lot of characters who may be up to no good and sense the house is haunted.

Watching it this second time, I found it to be just as suspenseful, but there was a great sense of satisfaction in pickup up on all the clues that are literally peppered throughout the movie. The clues are subtle and out of context they just seem like half completed thoughts. Or, they could be referring to multiple things – the war, the neighbors, the house.

For those who are used to hack and slash films, this is clearly not for you. For those that want a movie to build and for there to be a point to the story, this should keep you both intrigued and entertained.

With the lights turned down low, this movie still creates a suspenseful atmosphere and offers a story that slowly draws you in and sets several wheels in motion to make you wonder who’s telling the truth. And then in the end you’ll see how everything fits together perfectly and everything you were offered makes complete sense.

This is a top notch movie and for $6 you simply can’t go wrong.