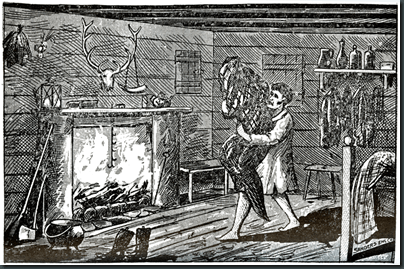 A&E recently aired Cursed: The Bell Witch, a five part series where John Ceallach and Chad Higginbotham arrive in Adams, Tennessee to investigate the legend of the Bell Witch. Certainly not a new thing, what makes this so special? Well, it turns out, John is a direct descendant of John Bell and this curse affects his son. So, he’s out to try and learn about this curse and bring it to an end.

Things start off quite amusingly at the local diner, where the regulars seem to give John a hard time and are affronted by his intrusion. He’s politely given a warning and told to be careful.

Along the way he hears lots of stories about the legend and a lot of variations. That’s expected since the story takes place in the early 1800s and everyone associated with the tale is long gone. Clearly what we have now are interpretations and guesses. But the truth might be out there and John is going to make an effort to find it.

The legend seems pretty ingrained this area as John sets up camp on a small plot of farm land and finds little wooden stick dolls strung up in the trees reminiscent of Blair Witch. These are obviously new and were put there to hype up the legend.

During another late night trip, John has his truck vandalized, clearly by earthly forces, but yet another play on the legend to try and scare them. You have to keep in mind, people make money off the Bell Witch legend so it’s paramount to keep the story going.

Along the way, John meets with some historians and even a few relations from the other side of the family. All of them seem quite taken with the Bell Witch story and fear the consequences of it. John also visits the Bell Witch caves where he hears strange animal noises and visits with a Native American Shaman who thinks some of the curse may have come from the land.

It seems a Native American burial site may have been disturbed and the remain were treated improperly. There is some mention a skull was brought back and a tooth may have been left behind. It may simply have been the act of disturbing the grave. This may also just be a guess since there’s no real evidence to support the story.

John visits where John Bell is buried and to be honest, his site is completely overrun with growth. It doesn’t look like anyone has visited or taken care of that plot in ages.

There is also a visit to the family of Kate Batts who was accused of being the witch that harassed John. The Batts family feels their lineage has been wrongly accused and says most of the facts about the haunting are incorrect. One example, Kate lived for many years after John, so it wasn’t her "haunting" him.

As John and Chad continue, they discover a lot of the details about the legend are incorrect and try their hand at a few theories. They have some theories about abuse, bad land deals, jilted lover and even revenge. All of which sound a lot more plausible than the current story.

John is able to get the Bell family bible and has John Zaffis come have a look. Just as it comes out, a corkboard falls from the wall. Taking it as a bad sign, they simply put the book away. Of course, John feeds into this story with the usual rhetoric that items and the land can be cursed. But why put the bible away? What’s the problem?

They do some scientific inquiry, such as what would have been in the mysterious vial that was found near John Bell. The contents were supposedly fed to the cat, which died almost immediately and when thrown in the fire, it created a blue flame. Way to go in destroying evidence everyone. Even an idiot alchemist of the time could have you told you if it was poison. But no no, let’s throw it into the fire so no one can know what really happened.

Turns out the chemical could have been arsenic, which was readily available during that time and John may have been victim of a regular poisoning. And it sounds like the person throwing the vial in the fire may have been the guilty party.

Another thing they discover is that John Bell was a right bastard with a right bad temper. So much so, he killed a man. John apparently shot a man in the stomach. They also go with an angle that might have made John and Kate jilted lovers. Interesting angle, but it doesn’t really pan out. There is talk of perhaps improper relations with Betsy, the daughter plagued with all the visions and harassment. Not sure if that pans out either. We also get that John was excommunicated from the local church because of some bad land deals. Seems he found himself afoul his fellow parishioners.

At any rate, John Bell is not some poor, hapless victim. It looks like he pissed off a lot of people, treated them poorly and even killed a man. That lends a whole lot more to the idea that a creature of this earth was responsible for his death. It seems we have plenty of suspects, plenty of motives and considering the time, opportunity wouldn’t be an issue.

It’s time for another visit to a cemetery and this time they bring along a medium. The local investigator whips out her K2 meter and goes with the trick of unscrewing the back of the flashlight as a way to communicate. Haven’t seen that gag since Jason and Grant on Ghost Hunters.

Without making too much headway, John decides to circle back to the Native American angle. He makes an offering to the spirits and to the land with his own Burning Man in the middle of the field. Lots of townspeople show up, because hey, there’s a fire, why not come on down and have a look.

When that doesn’t seem to work, it’s time to try an exorcism. John gets his Pastor to come out and perform a blessing/cleansing/exorcism on him to rid him of the curse.

And seemingly, that might have done the trick. If there was anything to exorcise.

The Bell Witch story is pretty damn fascinating, there’s no disputing that. It makes for a great ghost story with lots of characters and lots of blame to go around. However, if you look past the hearsay, conjecture and rumor and look at the source material itself, you find there are a lot of problems with this story and you begin to question everything. After a few minutes it’s hard to feel that the Bell Witch legend is anything more than just a legend.

Most of what people know about the story comes from John Bell’s son and his diary entries. The diary of John Bell’s son was written 30 years after the event and he is writing about what occurred when he was 6.

So nothing was written at the time the events really happened. No one has a single reliable source of information and clearly nothing from anyone who was actually there. This is what the legend is based on, those three items. Further, the diary of John Bell has never been seen.

Like all tall tales, all sorts of pieces have been woven in, including Andrew Jackson, who never went to visit the Bell home. He was never in the area, at least not during the time he was claimed to be there. So clearly he never slept at the home and clearly he never saw this supposed witch.

While it may be written that John Bell died from supernatural causes, it’s obvious that’s not the case. If you look at the symptoms described, he had a neurological disorder that caused hallucinations and delusions. There was a chance he was poisoned because he was an ass to his family and community so they slipped him a little something. Either way, no curse from a witch.

This meant there was a witch around every corner and superstitions ran rampant. And that’s how you get a story like this. There is no Bell Witch and no Bell Witch curse. It’s just a superstitious story that keeps getting passed down. Now, there is just a lot of tourism trying to cash in on the fun and a couple of half-way decent movies here and there.