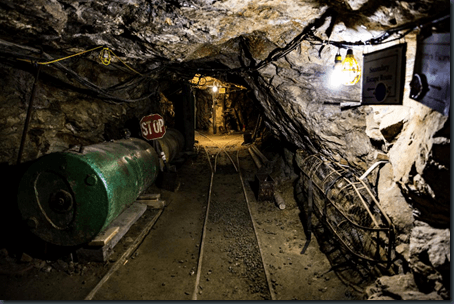 To kick off the new season, Zak and crew head to Colorado to investigate a haunted gold mine. They’re specifically in Idaho Springs to visit the Phoenix Mine and the Comstock mine. There are tales of Uncle Ray, who supposedly practiced Black Magic and the sound of Tommyknockers. For those who remember Ghost Mine, that crew was fearful of Tommyknockers as well.

There are couple of odd stories about this mine. First, Uncle Ray, a former tour guide, not miner, who supposedly practiced dark magic and "left a trail of depraved evil" according to Zak, had his ashes scattered in the mine. The other story is about two men who were killed by a named Gillespie. He shot them in the head while they were out walking and looking at the mine.

If Ray brought this depraved evil as Zak calls it, why were his remains scattered in the mine? And clearly with the owners understanding since that section is closed off. It’s not like they snuck his remains in there and the location is mystery. And how do they know he practiced dark magic? What exactly did he do? Considering they believe in Bigfoot, Tommyknockers and who knows what else, they’re awfully quick to condemn this guy, but still put his remains in the mine.

To add to the quirks of this investigation, as Zak is hearing the story about the men being killed from Al, the owner, Jo and Victoria come up to tell him they just heard voices in the Comstock mine. Zak decides to investigate, but almost goes into a panic as he enters. He states he’s risking his life and oversells how dangerous the mine is. The ladies, in their sassy pink hardhats, show no signs of anxiety and forge ahead.

Zak breaks out the recorder and gets the words, "get out" and he does exactly what the voice asks and runs out of there. The ladies would prefer he stay and keep trying to communicate, but Zak wants no part of that action. Keep in mind, he’s only gone in a couple hundred feet.

While they say the mine is in bad shape, there is no way in hell the show or the owner would let Zak go in if it was really going to collapse. Even if he did sign a waiver, which I’m sure Zak would bring to our attention, they wouldn’t risk people’s lives. And those ladies had no fear of going in there even if Zak does call them crazy. Pretty sure this is yet another one of Zak’s phobias getting the better of him.

Before the investigation starts, Zak gets a call from Jo, who explains that she has a picture of some miners she caught in the tunnel and that there were blasting caps on the ground near where they heard "get out". So, the voice that Zak originally described as demonic, is now considered a warning because he was kept away from the blasting caps. Of course, the blasting caps need a charge to do anything, but that’s not the point.

Now, with the investigation really getting ready to start, they are thwarted once again by what Zak is describing as a bear and Hank says is Bigfoot. As everyone but Zak goes to investigate, because he is scared witless, they soon discover the cause of the disturbance is a raccoon. So, Hank is ready believe in Bigfoot rather than a raccoon nosing around in the trash. This is how myths and legends get started.

Ultimately, they make it into the mine and Zak asks if anyone can hear him. He asks if it’s the spirit of Ray and gets three knocks. When Zak asks for someone to appear, he gets a little stick figure on the screen, which nearly makes Zak soil himself. To Zak, this is confirmation of a Tommyknocker.

The next part of the investigation comes when they visit the ashes of Ray. As they try the spirit box, there is an orb and a flash of light above Aaron’s head. At the same time, Jay says something grabs his pants. Meanwhile, Billy, in another part of the mine gets a blob on his thermal imager.

For the big finale, they bring out the laser microphone. If the beam is broken, it makes a sound. And so, it makes noises as soon as they hook it up. Jay says it sounds like there was a cave in because of the continuous noise. Next, as they move closer to the remains of Ray, there is a lot of static as though someone is standing in the beam of the laser. This further convinces Zak that the mine is completely charged with spirit energy.

However, this episode has a lot of things wrong and plenty of misleading information. Noises in a tunnel, like creaking boards, that carry on for hundreds of feet is not the result of Tommyknockers. We already know animals are lurking around, what is to say they aren’t in the tunnels themselves? Jo has a photo of miners that looks it was created with a ghost app on a phone. Uncle Ray is such a terrible guy and purveyor of evil, that they buried his ashes in the mine itself. And again, Zak is ready to believe he is evil without a single shred of evidence. That’s not hysteria in any way.

When all is said and done, about the only thing they capture for sure, is the sound of creaking in an old tunnel and a raccoon. I don’t think these count as definitive evidence of the paranormal. Further, Zak already made claims about demons and has problems with the close confines of the mine. He is totally frightened, so he’s going to see whatever the heck he wants to see and his common sense has been thrown out the window.