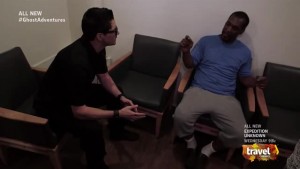 So we’re off on the Ghost Adventures Halloween Tour. According Zak, we will start in Nevada and head south into Texas, following the trail of Satan himself. That is indeed a bold statement.

There are several destinations ahead, with the first of El Paso, Texas on the border of Juarez, Mexico. According to Zak, the violence and death seen in this area is due to the demons feeding off the dark energy. They head to the De Soto hotel, where it is said evil sprits lurk in all corners because of all the Satanic worship. This is supported by the sound of little girls in the basement of the hotel and the fact a Satan worshipper, when captured by the authorities, put curses on the officers.

Tenants say they hear a little girl running around, but when they open doors for her or get to the stairs, no one is there. There is also a story of a gunman that open fire in the hotel, and according to one of the men who witnessed the incident, he was possessed by something evil. His body convulsed on the floor and he spoke in tongues.

Based on these stories, Zak feels the little girl is actually a demon in disguise. Additionally, residents are fearful of the basement, even though most of them have never been down there.

To get a lay of the land, Zak meets with the property manager and heads down to the basement. He begins to feel dizzy and fights violent thoughts that aren’t his own. They meet with Rev. Harry Flores who says he saw a pentagram on the basement floor and people have claimed pebbles were thrown at them. When the location of the pentagram is pointed out, that’s where Zak says he was standing when became dizzy and violent. The Reverend, standing the same spot, doesn’t show the same behavior.

Reverend Flores, then takes them to the Concordia Cemetery, established in 1856 and the location of some 60,000 burial plots. It is also said that Richard Ramirez, the Nightstalker, not only slept in the cemetery to escape his abusive father, but also performed Satanic rituals. And it appears he’s not the only one as the Reverend claims there are decapitated Jesus statues, the remains of animals and upside down crosses. He also shows off the Infant Nursery, a separate plot of graves where people claim to hear the giggling of children.

The actual investigation starts with Zak in the basement of the De Soto hotel and Billy back in the Concordia Cemetery. You can tell right off the bat, Billy is not having a good time. But things aren’t much better for Zak as he smells something putrid right at the entrance to the basement. He gets the building manager, who agrees there is something rather foul in the air, although they don’t identify a source. A toilet could have exploded for all we know.

As they enter the basement, it’s only a matter of minutes before Aaron says he’s not feeling well, and there is the sound of a pebble being thrown. With the spirit box running, Aaron gets a male and female voice come through.

Zak, Aaron and Jay experience quite a few scares and when Zak has had enough, he brings out a large bundle of sage and burns it to cleanse the evil. He burns it right over the area where the pentagram would have been drawn on the floor. Aaron and Jay are both concerned about this sage burning and begin to become anxious and hostile. They claim they want to lash out against Zak and stop him. While their aggression is heightened, they also hear an argument break out right above them. This argument is linked to demonic activity and isn’t related to some sort of alcohol fueled dispute, because this is too high class an area for that sort of thing.

With their nerves on edge and the sage essence burning in the basement, they see something quite shocking on the monitors. One of the cameras picks up a fan as it moves off the ledge where it’s resting. It moves to the side, then collapses to the floor as though being pulled by a cord. When Zak rushes to the scene, he says there is an icy cold wind. And while discussing the ramifications of a junk fan falling in a basement, a light turns on above their heads. This again is the work of the demonic rather being related to junk wiring in such a well maintained and high class residence.

We also get some fun scenes of the residents playing with a camera that falls from it’s perch. A few seem quite taken with it and gaze longingly into the lens, while they ponder how much it might be worth at the local pawn shop.

Meanwhile, back in the cemetery, Billy recites a small prayer which concludes with the sound of a crow cawing at him. This nearly causes Billy to soil himself. Right on the heels of that, a group of figures is seen walking on the perimeter of the cemetery. Zak feels these are demonic shadow figures coming out of the sinister trio of trees that Billy is near. These trees are supposed to have sprung up like a trident in the location where Richard Ramirez practiced his Satanism. Based on the fact they are simply a few trees in a line and in no way form a trident, I’m not sure what Zak’s talking about.

These sinister figures, who also happen to have automobile traffic moving behind them, don’t accost Billy or cause him any harm, they simply plod along, but he is a wreck and nearly frightened out of his wits. So much so, that he calls the authorities to come look around. However, they find nothing and he doesn’t record any other activity and nothing reveals itself to him.

And with that, they move on to their next location – Denton, Texas, a location on the so called Pentagram of Blood.