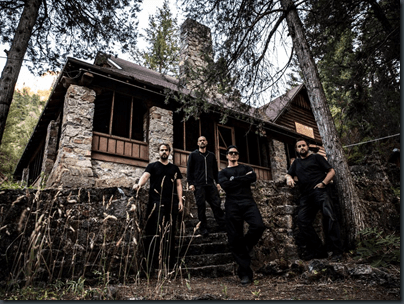 Zak and team head to Logan Canyon, Utah to investigate St. Anne’s Retreat, where some strange events have taken place. However, before they can even get there, Zak believes the dark forces are working against him since he can’t find the place.

After heading back to town, he talks with locals to get directions and hear their tales. And tales they have. They all begin with, "legend says," "I’ve heard," and "supposedly". They hear the story of a pregnant nun, banished to the retreat and forced to give birth in solitude. She then drowned the baby and slit her own throat. I’m quite sure this is an urban legend.

About the only story they can confirm is that a group of teens were held hostage in one of the cabins by three gunmen. They went out on Halloween night, where a group of security guards found them, took a few shots, then tied them up. They were threatened repeatedly and held until morning.

The men were arrested and convicted. The victims claim the men looked evil with one saying he saw a Hell Hound with red eyes, and foretells bad tidings. With a bit of prompting from Zak, they agree the men were possessed by demonic forces.

Tito, says the lead gunman claimed to have killed multiple people and buried the bodies under the cabin. However, no bodies have been found on the property.

To further investigate the claims, Zak brings in psychic medium, Karen Baldwin, who immediately mentions the number 3. This of course refers to cabin number 3, the three men who held the teens hostage, and the three scratches one witness reported getting.

Karen follows this up with stories of Satanic worship and a male presence that likes to taunt and dominate people. She says something negative has played in the hills and she feels "damage." Karen then breaks down and talks about a "she," which Zak says is a reference to the nun.

Zak is firmly convinced the security guards were possessed by demonic forces and these dark forces were conjured into existence through the use of Satanic rituals they have no evidence of taking place.

As the investigation starts, they lock Jay into cabin three. And they really lock him in, screwing a board into place over the door.

Zak and the rest of the team head to the pool where the nun supposedly drowned her child. Zak begins to "summon" the forces and opens the portals. As proof of the demonic, the interior of the bathing shed is red on the thermal. Also, Billy takes issue with Zak’s "summoning."

Zak will open a portal, but he won’t investigate the shed. He leaves that to Billy while observes from a safe distance. Tripping from the use of the word, "summoning," Billy feels a dark energy wrap around him. They also hear noises which they say are Native American instruments.

Meanwhile, Jay comes unglued inside cabin 3. He’s locked inside, and has convinced himself he has no protection since his charms broke off earlier in the day. With fear and sensory deprivation setting in, he feels something is out to get him, so much so, he throws the Spirit Box at it. There are plenty of pops, creaks and footsteps in the cabin, which you normally hear as old wood settles at night. But these terrifying sounds without form bring Jay to tears.

In the main cabin, they look to see if they can find the dark energy hiding in corners. Since nothing is happening, this is proof the entity is a coward. Zak then sends Billy to the top floor, where he becomes aggressive and provoking. As we should expect, Zak sees a light orb and says this is responsible for Billy’s behavior.

While Zak is safely outside and away from danger, he takes full spectrum images and gets something interesting. There is a shadowy looking figure in the frame, which Zak feels is the aforementioned nun, who may or may not have existed.

When we take a step back and cast a critical eye, all the stories are "legends". The only real one involves the security guards, who most likely had severe mental and behavioral issues, not demonic possession. It’s not the 1700s any more.

But again, there is no evidence that shows death occurred at the property. The Satanic worship is rumor and is always told after a place has been abandoned. There is no proof of a nun. The medium does a fine job of adding to the hysteria. There is no proof for anything she said.

Further, what evidence did they capture? Jay wasn’t attacked, nothing came near him. He was left alone in the dark, and when his charm was taken away, it played so heavily on his mind, he figured everything was out to get him.

They heard noises in the woods, heard creaks, and the settling of buildings. No scratches, Zak wasn’t pushed off the railing like the investigator claimed happened to him and Aaron didn’t do his usual routine of becoming dizzy and sick.

As Zak said, it looks like the set of Friday the 13th. A group of mentally unbalanced guards took some kids hostage and legends have grown from there.